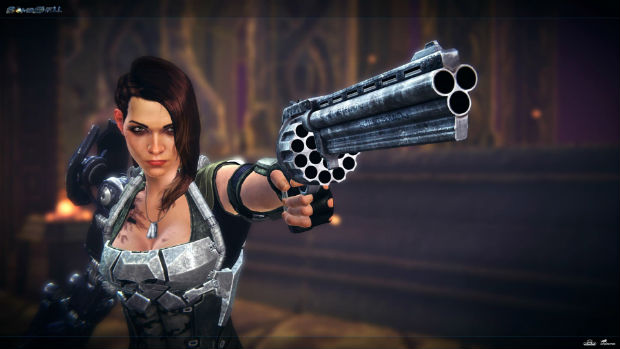 Last May I broke the news about 3D Realms’ upcoming Bombshell, and the typical ’90s-esque trailer was decidedly light on gameplay but generous with clichéd teaser elements.

Now there’s a proper trailer out to dissect and pick apart and it looks like Shelly “Bombshell” Harrison herself has grown a little more hair than when we last saw her. She still looks like she desperately wants to DJ from her MacBook at a dimly-lit coffee shop, but she also has a really awesome mechanical arm that looks like it’ll play an interesting role in the story.

Rather than being a straight-up shooter, Bombshell is actually an isometric ARPG. It also features a gaggle of aliens headed for an ass-whoopin’ from ol’ Shelly herself. You’ll be able to upgrade her arm using specific ability trees (as expected) and supposedly utilize first-person shooter controls to take care of business. I gave the trailer a quick peek, as I was initially excited about Bombshell when I covered it last year, but now that I see it in action it’s hard to say whether or not I’m still interested.

I suppose I’m as interested as I can be while eating cold fries and pretzel bun cheeseburger sliders from Beef O’Brady’s in my living room at 6 AM, but the isometric view gives me pause. And I’m sure Shelly is your typical everyday lady-palette-swap-of-a-soldier or whatever, but hey — I’m down. I can’t turn down a 3D Realms game, after all.

Bombshell is headed out sometime this year for Xbox One, PlayStation 4, and PC.