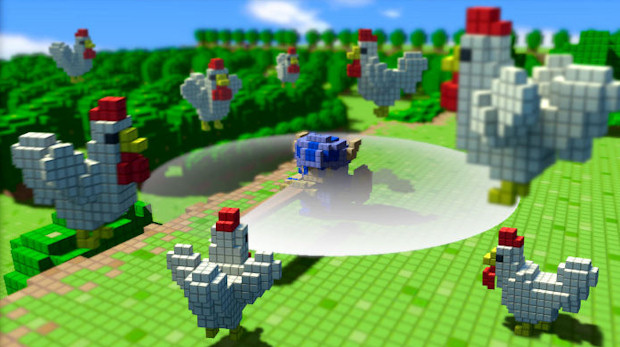 Man, if you thought the Zelda-plagiarism accusations were bad before, I cannot wait until the Nintendo loyalists check this new video out. Yes, it’s time for another 3D Dot Game Heroes video (after the jump), and this one displays its Zelda influence like never before, with music seemingly designed entirely to piss off those who hate the fact that this game is a parody-flavored homage to the classic adventure series.

As well as the Hyrulian opening, this new footage also shows off the character editor, as well as what looks to be the very opening section of the game. Here, the Zelda influence runs wild. The main hero strikes a Link-esque “item get” pose, and as he walks around the world map, the screen scrolls in very much the same way as the classic top-down NES and SNES adventures.

As the character goes on and acquires what looks to be a Master Sword, it becomes clear that From Software wants you to know it’s taking its cues from Zelda. It’s so blatant that it is obviously not an attempt merely to copy the game and hope nobody notices. This game knows what it’s doing, and it knows we know.

It’s really interesting to see, though. How far are they gong to go with this? I think we’ll need to see English dialog before we can see just how much of a parody this game will be. At the moment, I admit one could be forgiven for thinking it’s straight up plagiarism at first glance, but a little research uncovers From’s intent. Whatever happens, it’s going to be really interesting to see how this goes over in the West.