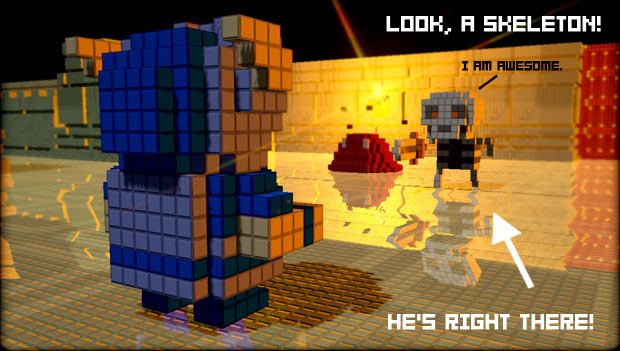 Last week, Colette brought us news of From Software’s charmingly blocky new RPG, 3D Dot Game Heroes, which was set to be released in Japan sometime in November. Today, Dengeki Online reports the specific release date to be November 5th, with a price point of 7,140 Yen.

More interestingly, the article gives us a peek at the game’s storyline. As you’ll notice in some of the screenshots below, the tale begins in a traditional 2D setting. After a young hero seals away an ancient evil, (the game is intentionally filled with ironic RPG cliche), the people of the land begin to lose interest in their 2D world and eventually become unhappy. Driven by his desire to see the kingdom and its people restored to their former glory, the powerful king transforms the world into a realm of shiny, 3-dimensional beauty. Not long after, there’s an “incident,” and the hero’s 3D quest begins.

Sounds horribly typical, but it knows it. That should be fun, and the only thing that could possibly make it any better is a skeleton. Thankfully, Silicon Studio are happy to oblige and as you can see above, the game features a f*cking skeleton. SCORE.

Still no word on whether this title will make its way stateside, (or whether we’ll get to play as the skeleton, which would rule), but I’d be willing to bet there’s enough of an audience here for it. In any case, we’re keeping a close eye on this one and we’ll let you know. Check out the gallery for a look at both the 2D and 3D versions of this charming new world. Also, the skeleton.