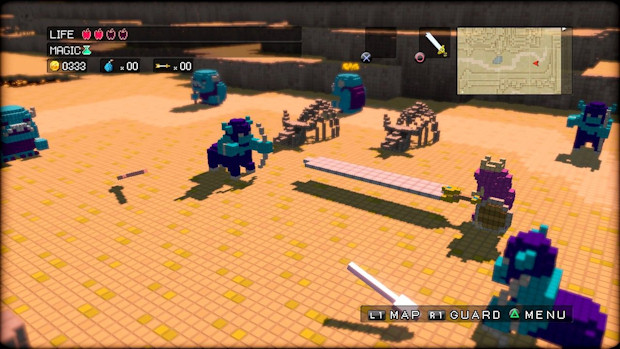 Another day, another story about From Software’s 3D Dot Game Heroes. This time, we’ve learned of some game modes and minigames that will be appearing in the Zelda parody/homage RPG, including a tower defense mode and a racing section. Hot stuff.

Dot Game will have an “extreme difficulty” mode. The new difficulty is unlocked after clearing certain objectives in the standard game. Extreme difficulty mode won’t just be the main game with higher challenge, as it appears other characters in the game will be conscious of your past playing experience, and a number of NPCs will feel compelled to commend you for your bravery in tackling the harder game.

Requested by fans is a new “Grid” mode. This mode lets you slightly alter the graphics and toggle a grid that separates the world and environment into squares. I personally prefer the grid on, since everything looks more like it’s made of little pixel blocks. Taking the grid off makes things look a bit like a child’s drawing, which is not so awesome.

In addition, two new minigames have been detailed. First up is Dash Race, which is a simple case of using the character’s dash move to zip through a course and get the fastest time. There is also Block Defense, a tower defense game in which you position various attack blocks to stop waves of enemies. You can also directly get into the action and fight enemies yourself.

Looks friggin’ sweet to me. From Software has more than proven itself with Demon’s Souls, so I don’t see why anybody with a PS3 and a love for RPGs wouldn’t be excited about this one. I know I’m chomping at the bit.