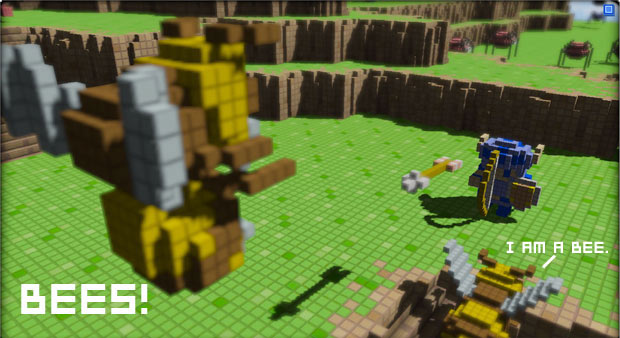 Just when you thought From Software’s upcoming 3D Dot Game Heroes couldn’t possibly get any cooler, this week’s issue of Famitsu touts evidence to the contrary. Not only will the game have skeletons, but it will also feature items and weapons reminiscent of The Legend of Zelda, including bombs, a bow and arrow, and a boomerang.

Much like Link, the game’s heroes will use these weapons not just in combat, but also to help solve puzzles. The boomerang can be used to stun multiple enemies at once, and the bomb allows you to bust through walls, just as you’d expect. It’s an obvious (and welcome) homage to Nintendo’s classic, and should make for some satisfyingly familiar gameplay.

As you might have guessed, however, your main weapon will be a sword. This will start out small, but as you defeat enemeies and eat the apples they leave behind, both your life meter and your blade will increase in size. The two are directly related, so you’ll essentially be weilding your own life bar. Cool concept. Famitsu says that at max health, your sword becomes “fat, long and hard.” I’m not making that up, that’s their exact wording.

The new issue also reveals a second playable main character, known as The Prince. You’ll find a few shots of him, the aforementioned weapons, the sword and a print ad for the game in the gallery below. Oh, and there are apparently also BEES. This game had better come stateside.