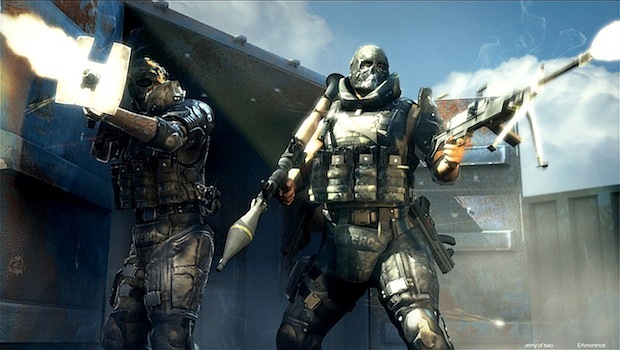 Butt-slapping, blinged-out guns, and music can mix. At least, that’s what EA Montreal is thinking. The studio announced earlier this afternoon that film and television composer Tyler Bates is the man creating the “immersive” score for their next game, Army of 2-2: the 40th Day.

Bates is the guy who composed the scores for the films 300 and The Watchman. In the videogame world, Bates is credited as the composer of the terrible RPG The Rise of the Argonauts, the bad action game 300: March to Glory, as well as the clunky brawlers Watchmen: The End is Night Part 1 and Part 2.

“The 40th Day is one of the most intense games I’ve seen,” said Tyler Bates via the press release. “The setting, characters and action in the game provided me the perfect backdrop to create an equally intense and dramatic score that compliments the gameplay.”

If Bates can capture what The 40th Day is all about in music form, then more power to him. But really, we’re more interested in killing dudes while playing with our pals.