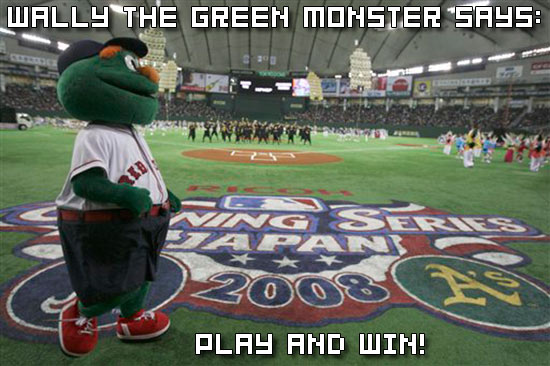 The 2008 baseball season got its start earlier today when the Boston Red Sox defeated the Oakland Athletics in Japan, 6-5. Three weeks before that, 2K Sports released Major League Baseball 2K8. So those of you who’ve picked it up have had a good amount of practice, and now you can put your skills to the test.

Next weekend, 2K Sports will be sponsoring a 72-hour “Opening Day Xbox LIVE Weekend”, including a Play & Win Sweepstakes. First, be sure to register your Gamertag on the official event page, https://www.xbox.com/openingday. Then, simply take part in an online multiplayer game of MLB 2K8 between 12:01 AM EDT on April 4th and 11:59 PM EDT on April 6th. You’ll get a new entry for every day you play (so I guess the maximum is three).

There are hundreds of prizes to be given out, most of which are various amounts of Microsoft Points. But there’s some decently cool stuff in there as well, including 2K Sports-branded apparel. Finally, three grand prize winners will have their choice of a baseball autographed by an MLB athlete, or an authentic MLB jersey for any player. Not bad, eh?

The winners will be chosen randomly from all the entries, so don’t worry if you suck at the game. Just play it on all three days to maximize your chances! Check out the full press release after the jump for more details. Finally, let’s hope that they get those patches out before the weekend begins — framerate issues just take all the fun out of the game.

March 25, 2008 – 2K Sports announced today a special Opening Day Xbox LIVE® Weekend for Major League Baseball 2K8. Beginning April 4, 2008, fans of all ages will be able to participate in a number of exciting activities online including a 72-hour Play & Win Sweepstakes. Every hour, gamers who register and play can win special prize packages such as exclusive 2K Sports t-shirts, hats, Microsoft points, and other prizes.

Before fans step up to the plate, they will have the opportunity to practice their swings with a free game demo of Major League Baseball 2K8 available for download through Xbox LIVE Marketplace for Xbox 360® video game and entertainment system from Microsoft. The free game demo will allow players to practice their skills at Boston’s legendary Fenway Park by playing three full innings as either the Colorado Rockies or Boston Red Sox.

To kick off Major League Baseball 2K8 Opening Day Xbox LIVE Weekend, fans will have the unique opportunity to compete online against the developers of Major League Baseball® 2K8 on Friday, April 4 from 7:00 p.m. – 9:00 p.m. EDT. Be on the lookout for the following development team Gamertags:

More details on registering for Major League Baseball® 2K8 Opening Day Xbox LIVE Weekend, and information regarding terms, conditions, and official rules will be available on March 26, 2008 through the official event page: www.xbox.com/openingday. Open registration will begin when the site goes live and will end at 11:59pm (EDT) on April 6, 2008. Xbox LIVE Gold members can also register for the weekend by downloading the free “Major League Baseball 2K8 Play & Win Registration” gamer picture from the Xbox LIVE Marketplace.

As the most fun and exciting baseball experience on the market, Major League Baseball 2K8 revolutionizes player control in the latest installment of the popular franchise with brand-new pitching, fielding and baserunning, as well as a completely overhauled batting interface. To bring fans closer to the action than ever before, Major League Baseball 2K8 also features authentic Major League and Minor League™ stadiums that have been redesigned for accuracy, complete with the details and specific architecture of each ballpark and city. Other in-game features include a wholly unique trading card system to reward special achievements, robust Minor League system including 90 playable teams, all-new Signature Style™ animations complete with home run celebrations and unique player walk-ups, and much more.

A part of every Xbox 360 game, Xbox LIVE is the first and only unified online entertainment network seamlessly integrated throughout the entire console experience, making it easy for you to find the friends, games and entertainment you want from the moment you power on your Xbox 360 system. The Xbox LIVE network connects you with more than 10 million members across 26 countries to enjoy hundreds of retail and arcade multiplayer games, free playable game demos, TV shows, movies, music videos and movie trailers, as well as new game levels, characters and vehicles for all your favorite retail games.