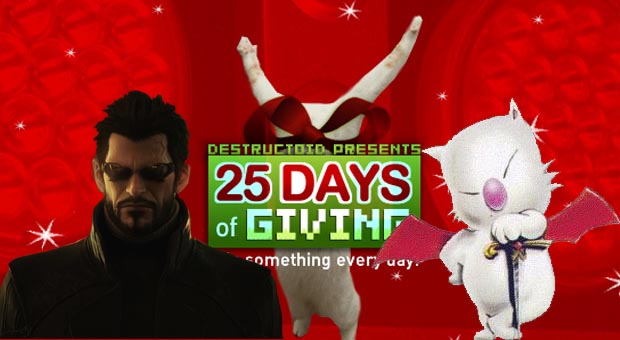 [Update: Contest over! Winners have been picked, check your emails!]

Not only is it the 25 Days of Giving on Destructoid, but it’s also the Winter of RPGs for Square Enix! Chrono Cross, Final Fantasy V and Final Fantasy VI have all finally made their way to the PlayStation Network and we’re doing a giveaway for each game all this week.

Today you can win Deus Ex: Human Revolution plus the “Missing Link” downloadable content for the PC. That’s not all! We’re also giving out Dungeon Siege III with the “Treasures of the Sun” DLC for the PC. In order to win a code, draw or photo edit a picture of any Destrutoid editor with some sort of augmentation added to their body, just like Adam Jensen!

Be sure to check out our Square Enix PlayArts Kai figure giveaway where we’re giving out ten figures based on Deus Ex, Final Fantasy, Metal Gear Solid: Peace Walker and Super Street Fighter IV all this week for more Square goodies.