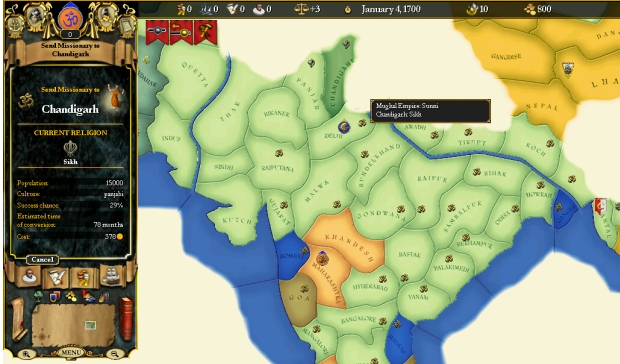 Welcome to another 24 hour contest! This time, we’re giving away For the Glory – A Europa Universalis Game for the PC. For the Glory is a historical real time strategy game that spans from the years 1419 to 1819. Build up troops, take over countries — do to the world what you will. Plus, the game was developed by a team within the Paradox fan community. Neat! You can get more info on the 32-player game after the break.

To win one of the five codes we’re offering, you just simply need to leave a comment saying “Give me For the Glory!” You can comment as many times as you would like, you just have to wait for three other people to leave a comment before you can enter again. Deadline to enter is 11:59 CDT tonight and the contest is open worldwide! Good luck!

[Update: Codes have been given out!]

Take up the reins of your country, guide domestic and foreign policy, navigate thousands of historical events, engage in various struggles and lead your country to prosperity – all in the name of glory!

For the Glory offers full historical immersion, with a completely new in-depth experience with over 10000 historically accurate events. Take charge of the mighty Habsburg Empire, the aggressive Swedish
state, or the seafaring Portuguese. Build up your empire through trade, diplomacy, colonialism and war.

Interact with real historical events and persons to determine what path your nation will take. Nothing is written in stone, and while a wise leader may choose to follow the path of history, you may also take advantage of opportunities for change.

For The Glory improvements and additions over Europa Universalis II:
· Simplified and improved user interface, including in-game alerts informing the player of key decisions which need to be made, and the ability to now move troops from the political map mode
· New graphical content including tailored sprites for individual nations and cultures
· Technical improvements including being able to now change graphical resolution, and the ability to switch between mods without exiting and restarting the game
· All original scenarios improved and rebalanced
· Improved AI
· Vastly improved modability over Europa Universalis II
· Gameplay improvements including;
– New core types of warfare (reclaiming territory, religious wars, etc)
– New ‘privateer’ leader type
– Reworked and improved spread of Protestantism
– Reworked rules for calculating supplies and attrition

Two mods are included in For The Glory:
· Age of Timur – set during the 13 th century and created specifically for FtG
· Alternative Grand Campaign / Event Exchange Project or AGCEEP for short – the most popular of the Europa Universalis II mods with features including 10,000 events and countless historical monarchs and leaders