[For his Monthly Musing, Wrenchfarm talks about how disappointing it was to see Alan Wake sell so poorly. Want to share your own disappointment from last year? Check out the Monthly Musing topic, then go write a blog! — JRo]

2010 didn’t really suck, in fact it was a fantastic year for gaming. Check out the titles dropped in the last year – Mass Effect 2, Super Street Fighter IV, Squablefields: Bad Company 2, Super Meat Boy, Fallout: New Vegas, Amnesia: The Dark Decent, Red Dead, Halo: Reach, continued updates for TF2 and L4D, and on and on. Another year where the problem wasn’t if there were any good games to play, but that there was never enough time to play them all! It would take a crusty old miser of jerk-bag to point to this year and make any serious complaints against the quality or quantity of games released this year; it’s just not reasonable.

But there was one thing that bugged me.

Why did Alan Wake get slaughtered in the market?

Up to the launch of Alan Wake, everything looked good. There was buzz on the blogs, early reviews were coming in solid, and the hype machine was in full effect. Microsoft threw its weight behind a brand new IP that was set to take all your expectations and turn them inside out. At the time, you could be forgiven for placing your pre-order for Alan Wake 2 and asking who was rumoured to be directing the movie adaptation; it seemed like we would be following the adventures of Alan for years to come. But then two weeks after its launch, the game had barely sold more than 100,000 copies.

As I said, the hype machine for this game was working overtime. After five years of secretive, teased out development, Wake’s release was supported by a massive advertising push that not only included the usual online ads and trailers and industry interviews, but an incredible street campaign with billboards, spotlights, and standees scattered all over major cities across North America. There was even a slickly produced prequel HD mini-series, Brightfalls, that was available online and on Xbox Live for your viewing pleasure. It was a critical darling garnering excellent reviews from most of the big names. Most reviewers usually presented any complaints about the game as minor nitpicks, and the game was recommended often.

Alan Wake‘s disappointing sales can’t be blamed on a lack of awareness or advertising, or a panning in the press. If anything, you would think such a push would generate sales just on its own. So there must be other reasons why it failed. 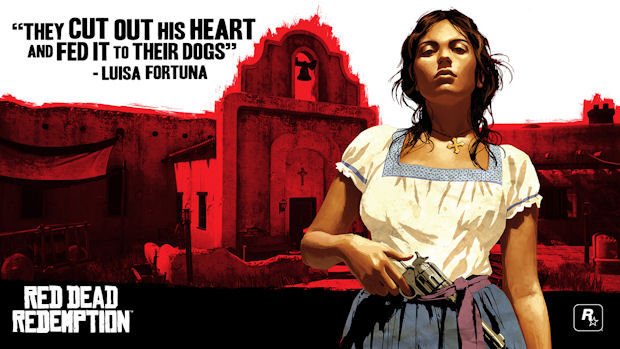 Well, for starters, they released right on the same day as Red Dead: Redemption. What, Remedy didn’t want to wait to release against Halo or something? I don’t know if it was hubris, carelessness, or some unavoidable circumstance that forced them to release when they did, but it can’t be argued that it had something to do with its sad fate. Red Dead, a highly anticipated triple A title from the super hot Rockstar of GTA fame, sold over half a million copies on its FIRST DAY and well over a million by the end of its first week. A pistol-hot success story that quickly cemented itself as one of the best selling games of all time. If you had 60 bucks and an Xbox that week, there was no question what game you were getting. I have no idea what business Remedy thought they had releasing right next to this juggernaut. Alan Wake spent half a decade in development, would it have killed them to release a few weeks later? Maybe put a pay cheque or so between them and Red Dead? It also popped up right around the same time as the latest Splinter Cell offering and a new racing IP Split/Second. So lets get it straight, a brand new IP about a writer fighting shadows decided to drop in direct competition to one of the biggest titles of the all time, the 18th or so iteration of a beloved franchise, and a sports/arcade game, just to make sure they had competition from every genre they could and ensure there were absolutely no dollars in the average gamers wallet to spare? Great planning.

Why not release a week or two later? Maybe the Spring wasn’t the best time to release a horror game anyway. If only there was some gloomy season with a holiday specifically designed to hype people up for spooky occurrences and dark haunted woods…. Ah well, that’s just me being salty. I have to assume they had their reasons for launching when they did, even if it seems ridiculous in retrospect. In any case, it would be lazy and dishonest to just blame Red Dead for its failure.

Good things take time, Alan Wake took five years. Five years of teasers, interviews, cryptic messages, and speculation. Hype and anticipation are tricky things. Developers obviously want to build interest in their game before release and its especially important for a brand new IP to try and get some kind of community going. But five years? I think they might have exhausted their good will. Even as a die-hard Max Payne fan who loved the idea of Remedy making a Payne-ish game staring a writer trapped in a Twin Peaks/Stephen King nightmare, I drifted in and out of keeping tabs on its development. Remedy would go to an event like E3, say some stuff, go silent for a few months, only to come out again and say nothing new or even contradict themselves. This went on for years. You can’t blame some gamers who wrote it off as vapour-ware or believed the rumours that development was troubled and the game was not coming together right. You have to manage that kind of thing properly . Valve might take a lot of flak about their long development times, but one thing they have always done well is keeping their cards close to their chest. Valve never gets slammed for breaking a promise, or failing to deliver a hyped game play element, because they keep their freaking mouths shut. Don’t go to press until you are sure you have what you are selling.

But the thing that depresses me the most is the idea that Alan Wake did poorly simply because it was new and different. I can’t help but feel that part of its failure was simply because it there was no number behind it, or a colon and subtitle, or any familiar spin off characters or mascots on the box. It bums me out to think that gamers were too timid to step up and try a new IP. Sequels dominate the game market, and we gamers have a long/hate relationship with them. On one hand, we keep buying them, on the other we also bitch and whine that we want innovation and fresh ideas. Unfortunately, time and time again as soon as a developer works up the courage and resources to try and give us something fresh, they get punished in the market. I imagine it must be incredibly frustrating as a creator to pour your heart and soul into a concept only to watch your game sit on the shelves while Call of FPS: Annual Release Ops shatters every record in the books. Not to mention the cooling effect that has on the money behind these games who would much rather bet on a sure thing than risk losing money, and who can blame them for that? 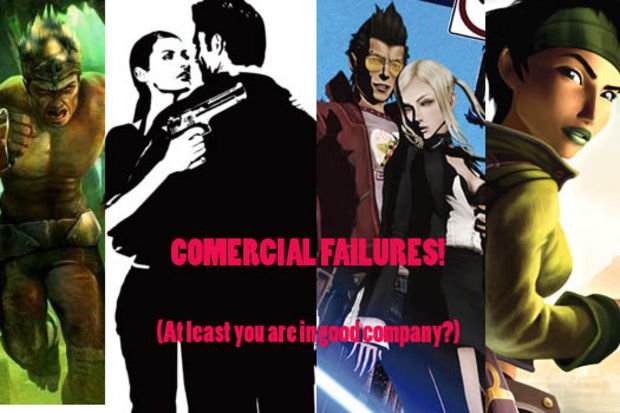 “Nah, these games look like junk. Got the new Madden?”

I think some of the “art game” hype backfired on it as well. You can see this was a fear the developers had as well as many of the interviews near release really pushed the “this is an action game” angle less than the story and artistic elements. Terms like “psychological thriller” and “novel come to life” probably did as much to scare off gamers as Max Panye 2‘s regrettable “Film Noir Love Story” tag line did. I don’t want to get bogged down discussing the tired old arguments about whether games are art or not (a game of intellectual dithering and hair splitting that was old back on the SNES) but there is this general longing in the video game community to be taken more seriously. We want our hobby to be seen as more than just adolescent power fantasies and waggle-filled party games. So its all the more disappointing when games that proudly advertise a mature and emotional experience get tepid responses from the community that clamoured for them.

Don’t mistake this for me claiming that games can’t deliver strong emotional artistic stories or any that do are instantly doomed to low sales. Red Dead: Redemption had a story rich in depth and character development and everybody loved it (as seen in how many GOTY awards its picked up). But, of course, it was the gunplay and heart-pumping action that was sold in the advertising, the story was just a delightful bonus. When you actually sit down and play Alan Wake it is very much a video game’s video game. You have guns, enemies with what are essentially force fields, platform jumping, and puzzle solving – nothing but rock solid gameplay fundamentals set in and backed up with its story and world. But because they really pushed the “psychological thriller” aspect, I believe that some gamers didn’t know what to actually expect from the game and just went with the more familiar and predictable titles. This is not the first time we have seen that kind of branding backfire on a game.

Its not all bad news though. Despite frankly dreadful initial sales, the long tail seems to have caught up with Mister Wake and sales now sit at a more respectable 860k. Still hasn’t crested a million, and I’m sure its not the kind of figures they were hoping for after a five year dev cycle, but at least it wasn’t a total flop.

The DLC chapters “The Signal” and “The Writer” were released and were amazing. Loads of jaw-dropping and mind-bending visuals and ideas. “The Writer” in particular was a trip and well worth 500 MS moonbucks. And, of course, the DLC leaves the barn door for a sequel swinging open, in what is either a sign of optimism on Remedy’s part or a nasty cliffhanger for the fans.

More interestingly, Alan Wake was included as a pack-in game (by way of a download code) with the new Christmas console release. Yes, I know being a pack-in game in this current generation is usually something reserved for disappointing sellers and something of a mark of shame, but they are also typically games that see sequels. I think Microsoft isn’t done with Alan Wake yet and this is an attempt to get its name out there and aggressively manufacture a larger fan base. I wouldn’t count out a sequel just yet. There is light at the end of the tunnel.