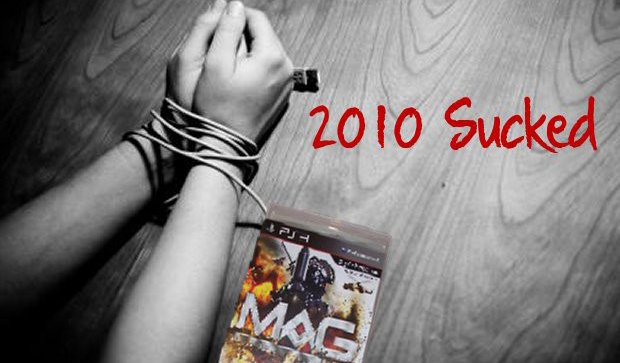 [For her Monthly Musing, Elsa shares that her biggest disappointment of 2010 was being so addicted to a single game, she missed out on all the other great stuff that was available. Want to post your own blog? Check out the Monthly Musing topic and start writing! — JRo]

I didn’t play a lot of bad games in 2010, nor did I play a lot of good games in 2010. Mostly I played one game in 2010 – MAG. I managed to play Heavy Rain, and tried to play White Knight Chronicles, Bad Company 2 and a handful of other games … but I kept putting MAG back in the PS3. I’m not sure why, because it certainly isn’t a perfect game … but I suspect it’s for the same reason that games like COD sell so well … addiction.

While people active in gaming communities tend to play a lot of games because they are exposed to information about a lot of games, and simply make it habit to move on, Joe or Jane Public are probably a lot like me. They buy a game like COD and play it. They play it a lot, all the time … really it’s the only game they play, until the next iteration of the game comes out, then they mindlessly buy it … and play it. There’s a certain comfort level in playing the same game all the time. It’s familiar territory with just enough “new” to keep people going. It may not be MAG or COD, it could be Final Fantasy, World of Warcraft or Oblivion – it just has to be a game with a couple hundred potential hours in it. Long enough to be like a favorite pair of slippers – well broken in, slightly odorous, fraying a bit at the edges, but comfortable.

Why MAG? Well, for me, it was the teamwork. When you get a squad or platoon that works as a team, the game is pure magic! This usually happens when playing with other Dtoiders, but there is nothing quite like the feeling of having Tsukanda as our “Sexy Platoon Leader” laying out the overall strategy… of having Clockwork taking out the AA so he can use his air strikes and rein terror on the opposing team (or sometimes his own team) … of having Talia come running in to revive me when I thought there was no hope left … of having my husband yelling at me to just “shut the fuck up!“, or even having Dan shoot me in the back and teamkill me for giggles. I also have to admit that I’m possibly just a teeny bit bossy … so the ability to gently make suggestions such as “any maggot caught at the burnoff towers will be teamkilled and teabagged” kinda makes my day. Unfortunately, there isn’t always teamwork, and people won’t always play nice together to take an objective. Increasingly I can see the appeal of games like Call of Duty. COD is the equivalent of “I’m gonna take my toys and go play by myself”. In MAG, I generally just go off and snipe, but in COD, the entire game is just “play how you want to play and who gives a shit about your teammates”. Winning the match isn’t the objective of the game – simply doing what you want, racking up kills … it’s kind of relaxing in a way. I can see the appeal, I can see the addiction and how this might be habit-forming.

I can feel the same addiction forming for Assassin’s Creed: Brotherhood. I find it relaxing to load up a game with longevity, that I can likely play for many hours. In addition to the main story line, there is the online multiplayer, the faction side quests, finding flags or feathers, and just goofing around. There’s a reason that games like this sell well. They have the content (either through multiplayer or game length) that is needed for gamers to gain a sense of comfort and familiarity. It’s like watching TV. Would you rather watch a show that you know you like, that you are familiar with, or would you rather take a risk and watch something new? Chances are, you automatically tune in to that show that you are comfortable with. It’s a rare person that thrives on constant change, most of us like what we know, rather than take risks with something we don’t.

I have over 1000 hours in MAG (excluding the 4 months of the beta that I played). That’s the equivalent of playing the game for 41.6 days straight – 24/7. If MAG was a 40 hour a week job, I’d have been doing it for 25 weeks… or just over 6 months. Since release that means I’ve played the game about 3 hours a day… every day. When put like that… that’s a lot of MAG! Yes, I did play some other games too… but mostly 2010 was spent playing one game. Granted, MAG has been through so many patches and fixes and versions and iterations that it seems like a very different game from what was released… but still, about 75% of my gaming time for last year was likely spent with this one game. The shocking thing is that I’m not alone in this. Many gamers spend the vast majority of their time in any year with just a very small handful of games – often only one or two.

I bought other retail games last year, a handful of PSN games, another handful of IPad and IPod Touch games. Additionally I played some old favorites like Killzone 2, Resistance 2, Warhawk and UT3… but for 2010 it came down to one game – MAG . It’s a game I love to hate, and hate to love, but I think that’s how most gamers perceive their specific game addiction.

2010 sucked… I spent most of my time addicted to just one game, but at least I found that one game to satiate my need for comfort and familiarity, that game that I wanted to turn my PS3 on and play, that game that let me spend many a happy evening chatting with newly-made friends. I guess 2010 didn’t suck quite so badly after all.