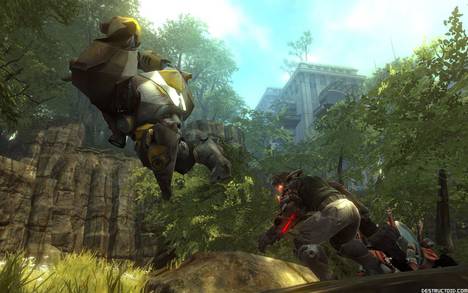 Bionic Commando fever has taken hold! With today’s release of Bionic Commando Rearmed on Xbox LIVE Arcade, claw arms and exploding heads is all we can think about. But for those looking for the next-gen fix, the wait might be a little longer than expected.

According to retailer GameStop, the GRIN-developed next-gen version of Bionic Commando won’t be shipping until January 12, 2009. When we contacted the game’s producer Ben Judd for clarification, he told us the game was on track for release between December 2008 and March 2009.

Capcom reps delivered a similar, if not slightly misleading story; they maintain that Bionic Commando next-gen is on target to ship “Holiday 2008.” When pressed a bit further, they did clarify that their idea of “holiday” can be any date leading up to March, months after most human beings celebrate any calendar holidays.

In their defense, the 2008 fiscal year does end in March, so we can almost see their “holiday” logic. Almost. In the meantime, check out our hands-on preview of Bionic Commando, which will be hitting the PC, PlayStation 3, and Xbox 360 … this “holiday.”