Yo momma has wild breath

I didn’t have to get up at 6:00am on a Saturday morning to go out in the freezing cold, sit on a train for two hours and spend 2000 yen each way to get my hands on the Nintendo Switch. But I did. I wanted to see what Nintendo’s new toy had to offer, even if Mario Odyssey was not playable, and I just had to try out The Legend of Zelda: Breath of the Wild.

The demo they had available is the same one that was at E3 and the one you’ve likely seen in videos where Link wakes up in some chamber then runs out to meet a cliff. So its not new. Whatever. I wanted to play it even if it meant having to get a time reservation ticket and come back four hours later. As I like to play games myself, I hadn’t watched very much gameplay video including of this demo, so considering its open world nature there are likely things in the demo I did not encounter or experience and thus can not comment on. 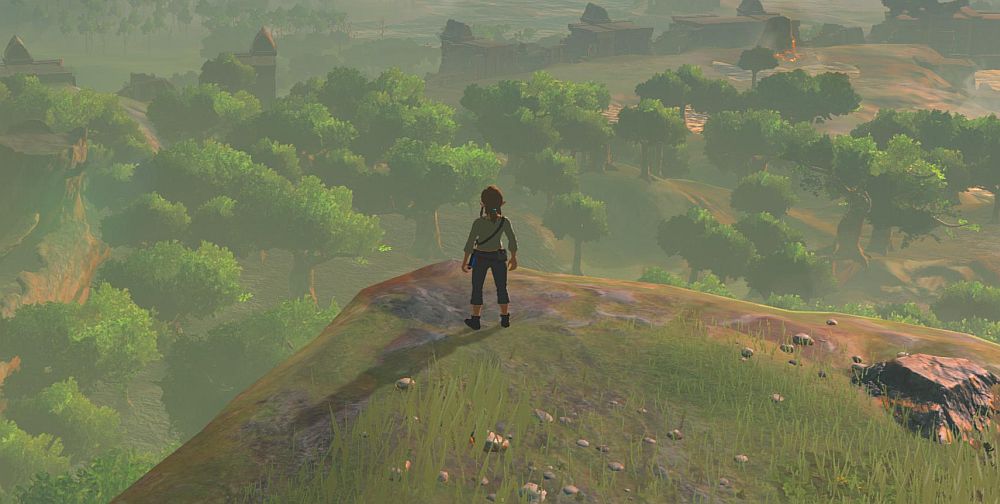 Frankly, I didn’t get to see a whole lot of the campaign because I was too busy goofin’ around in the open world like a damn fool. Maybe that’s a good thing. I skipped through the cutscenes to give myself more time to actual playing. There’s the first positive: skippable cutscenes. After waking up as you do in every Zelda game, you get walked through some basic tutorials like opening chests to find equippable clothing that I of course did not put on. Positive #2: Link appears in cutscenes as he is dressed rather than reverting to some default outfit in a pre-rendered video.

After running out of the tutorial cave in my underwear to the edge of a cliff while the title flashed, my first objective became clear: jump off this damn cliff. Spoiler: you can jump off cliffs. I knew but it didn’t really hit me until playing that you can manually jump, which along with climbing, crafting, and voice acting change the game up a lot from previous entries. Since you can manually jump, Nintendo decided to be less lenient on falls. Gone is the “wah wah wah” sound effect followed by respawning where you last stood. Now you incur fall damage based on how far you fell, and if you survive (you can if high enough), you just have to deal with where you are now. There was one big bottom-less pit I wanted to jump in, but time ran out.

Dying from the fall and at a later moment during play, I wondered how far I’d be taken back, but the penalty seems light as I seemingly did not lose any progress whatsoever. My second and final death occurred when I got swarmed upon finding a bow in a treasure chest that didn’t come with any arrows, much like how the Switch won’t come with any games (ba dum tss). I respawned near the entrance of structure where the bow was found with said bow still in my possession. I imagine there will be more sever punishment for dying at certain parts of the game such as in dungeons.

Assuming this is how the game actually starts and is a real slice of it I now know where to find the bow. Or at least a bow. Nothing explicitly directed me to run towards that structure, and nothing interesting seemed to lie inside. The exact geography of the map has left my memory bank, but maybe through clever level design I was implicitly guided in that direction? I don’t know. What I can say is that it seems entirely possible to not go there, missing it entirely until you find another or it is required at a certain point in the game, perhaps in a dungeon. While I’m surprised such a seemingly important tool would be in such an inconspicuous place, it’s a good sign that Nintendo is committed to the freedom they promised with this return-to-roots installment. 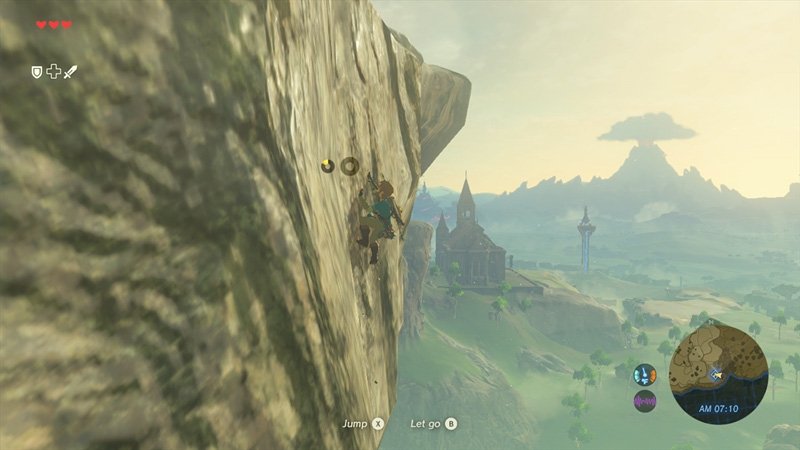 After exiting Link’s mancave you are shown some mysterious mellow fellow. Every time I popped up a gameplay video for a few seconds or when watching others play while waiting in line, people always seemed to be talking to this dude. That made me think that the game was going to make me talk with him for a few minutes. Nope. Instead I picked up a stick and threw it at his head. He reacted, but I wish there would’ve been more of an impact. I want to punch dudes and have them get up and say “Thank you Boss!” Slightly curious I stopped chopping him with an axe I found, gave in and tried chatting with him. Disappointingly he didn’t scold me, but I was able to choose some snarky responses and leave. I was on my way to picking up more sticks in no time.

Every time I see crafting in a game I let out a big sigh and try to ignore it as much as possible. I didn’t get a chance to craft anything but I started picking up various objects including food. Oh boy, I had forgotten about the cooking and eating reveals. I hope crafting, eating, and the breakable weapons aren’t too annoying, because I really am sick of the survival genre. This is not the stuff I come to Zelda for.

Whether you like the old school open world games, or the more streamlined and linear style, Zelda has always had lively locales and colorful characters (well, OK maybe not the original). My two favorite games in the series, Majora’s Mask and Wind Waker, are full of life and characters. I’ve read conflicting reports about the existence of towns or villages, so I can’t say anything beyond that I hope there are settlements and shops and the like. The environment gives me Shadow of the Colossus vibes with its lifeless open plains and ruins. While that worked for the simple but focused gameplay of Ico’s successor, I’m not super drawn into the foggy and barren world of Breath of the Wild so far. I’m eager to see more as I’m certain the best parts won’t be shown up front. 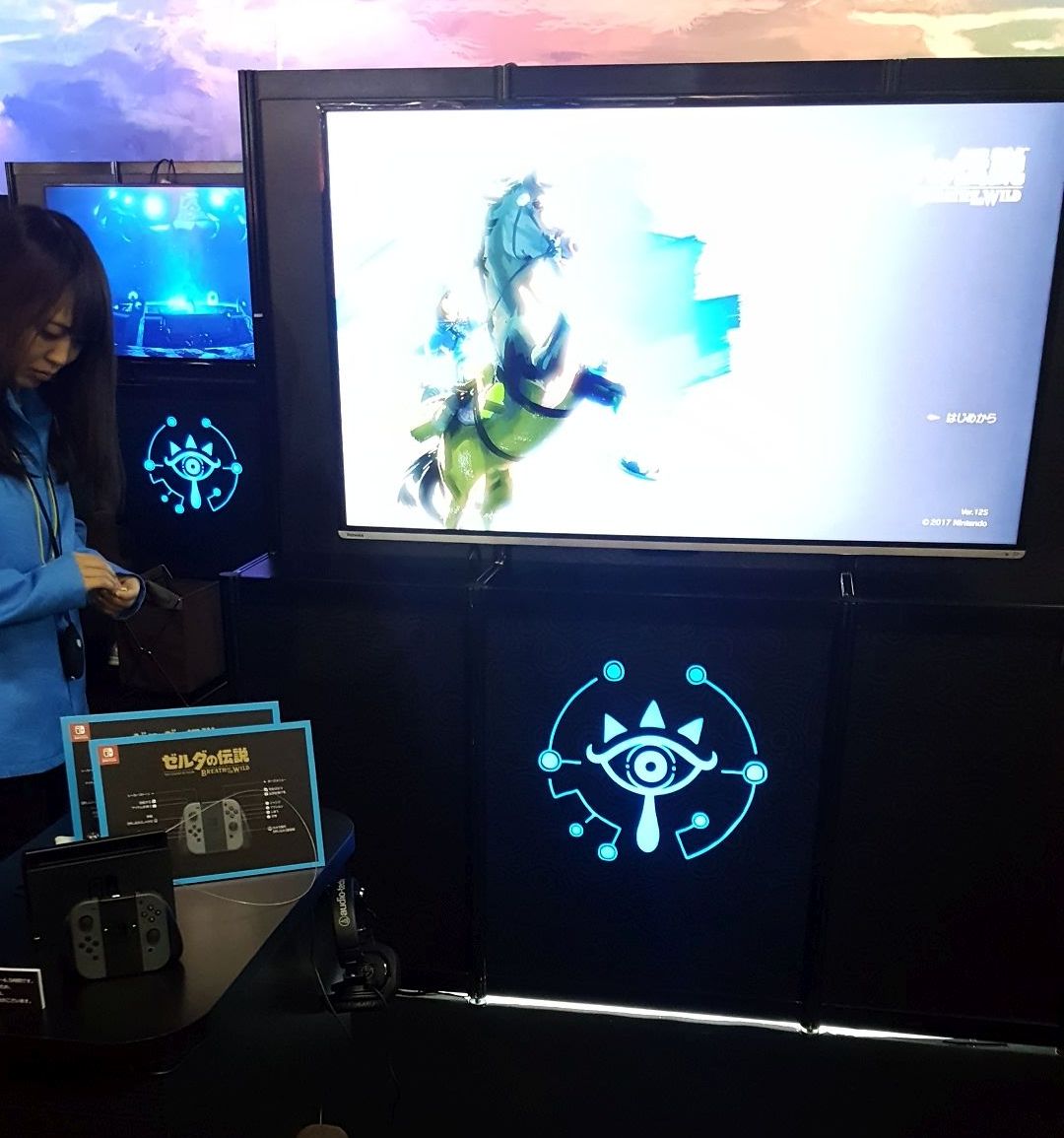 With regards to playing on the Switch, it may very well be an old version of the demo, but I can only comment on what I played: it did not strike me as superior to the way it looks on Wii U, it does take a noticeable resolution drop in portable mode, and there were some frame drops from time to time though nothing major. Having played 1-2 Switch and Arms prior, this was the first game on Switch I played using the Joy-Con as a traditional controller, both with the Grip and attached to the Switch screen. Not to delve into talk of the console itself, but I will say the controls felt for the most part natural on Grip. Using the bow and climbing were a bit awkward, but both things I see myself getting used to quickly.

All criticisms aside, when my time was up and the “Thank you for playing!” message appeared on screen, I was kind of bummed I didn’t get to play more. In all the games I’ve demoed at Tokyo Game Show and now this event, that’s a first and especially telling considering I was ready to move on with most games before hitting the time limit. Not necessarily because they were bad, but because I got the general idea of what those games were about. Breath of the Wild is not so simple; it has various aspects that take time to swallow and an open world that teases you to explore it. I’m not a fan of some of the things this entry is setting out to do on principle, but I have a feeling and confidence in Nintendo that it will all come together in a complete and satisfying adventure.