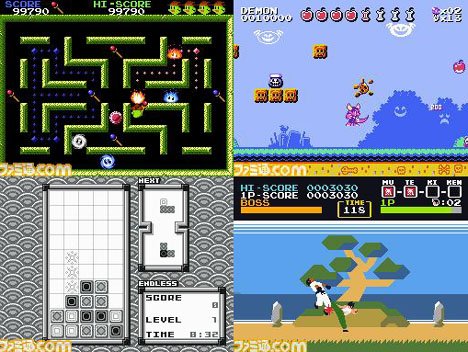 Retro Game Challenge’s sequel is coming to the Japanese DS in February of next year, but Famitsu has some screenshots from the game now.

The whole games within a game concept is pretty cool, especially when they were designed to emulate classic titles of our youth. Well, some of our youths, anyway. Game Center CX: Arino no Chosenjo 2 goes beyond the awesome 8-bit selections/emulations of its predecessor, even going puke green with an emulation of the original Game Boy version of Tetris.

Another game within the screenshots on Famitsu looks like a cross between Pac-Man and Gauntlet. There’s a Kung-Fu rip-off and a murder mystery, and the included side-scrolling platformer looks like something I’ve played before. That was probably the point, though.

This game’s predecessor, Retro Game Challenge, is on its way to the US, thanks to XSEED.