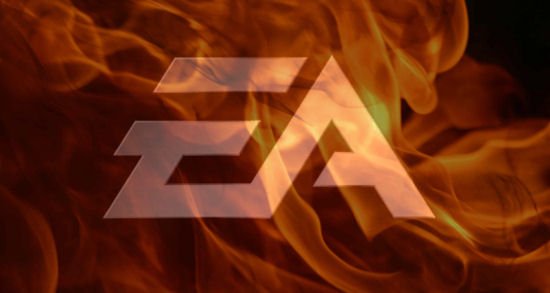 Electronic Arts is, without a shadow of a doubt, the Darth Vader, Hannibal Lecter and Bobby “The Brain” Heenan of the videogames industry — a timeless evil, a detestable arch-nemesis for every right thinking American gamer to truly despise.

Indeed, this is a time where corporations, responsible for many of modern life’s benefits, are truly terrible entities of darkness. This is an age where making money is the most sinful thing that can be done and EA, that most terrible of forces, is pretty good at raking in those evil profits.

Most people, however, just like to call EA terrible without having the first clue as to just how monstrous the company really is. Hit the jump and you will finally get a glimpse into the eye of terror itself, as Destructoid brings you, at great risk to ourselves, not one, not two, but fifteen reasons why EA is pure evil.

1: EA was founded by the descendants of Elizabeth Bathory and Genghis Kahn, whose previously unrecorded (and unbelievable, but just go with it) tryst ended with the spawning of a race of nocturnal bat-like creatures with hairy scales and leathery eyes. They now live underground where their legs have atrophied into useless stubs and they now use mechanical shells to move around. A bit like Daleks, but they’re not Daleks.

2: Electronic Arts was originally believed to be founded by Trip Hawkins, but this is a lie. Hawkins’ real identity is used car salesman Manny Maplins, who was kidnapped by the true creators of EA, who had his brain removed and replaced with a sparrow which flies around inside his skull, directing his actions. This explains why Hawkins now makes mobile phone games.

3: Contrary to popular belief, it was not Judas that betrayed Jesus to the Romans for thirty pieces of silver. It was actually EA that betrayed him for the NFL license.

4: To inspire developer Criterion’s Burnout series of games, EA hired forty five cars and filled them with live ducks. There were so many ducks inside that you could not see anything but feathers and beaks in the windows. EA executives then put bricks on the accelerators and made Criterion watch as the cars smashed into each other and there was nothing but twisted steel, bloody feathers and squawking giblets. Despite what you may think, this wasn’t to inspire the crashes in Burnout — the devs were just told that they’d be next if the games sold poorly.

5: You know when you’ve just finished using the toilet and you’re sat on the bowl and you reach for toilet paper only to realize, all too late, that only a bare cardboard tube is left? EA is responsible for that, somehow.

6: It was an Electronic Arts executive who suggested to George Lucas that The Force should be made out of glorified bacteria.

7: Electronic Arts currently wants to get its talons on the WWE license for EA Sports, but so far has come up short. However, it’s now widely known that EA sent an email to WWE chairman Vince McMahon, promising that if it doesn’t get the license soon, another wrestler may just “go nuts” and decide to “kill his family” before committing “suicide.”

8: EA actually developed the game Portal, but because it was so good and would run the risk of making thousands of people happy, EA gave it to Valve in the hopes that Valve would take a million years finishing it so nobody could get to play the masterpiece. When Valve actually released it, however, EA was furious but eventually decided not to assassinate Gabe Newell. Valve is currently holding onto Left 4 Dead, another of EA’s creations that isn’t intended to see the light of day.

9: Ten years ago, Electronic Arts used black magic to summon the soul of Joseph Stalin from Communist Hell, before enslaving it under the corporation’s mystical power. EA was then able to convert the soul into code and write it into digital downloads. Now, whenever you purchase downloadable content for Rock Band, you are unwittingly downloading a piece of Stalin’s digitized soul onto your games console. So far, the motives for EA’s actions are unknown and the benefits highly questionable, but EA is evil, not logical.

10: A thin, almost untraceable sheet of baby’s blood is pressed between the layers of every EA game disc, just to help make them more nefarious.

11: EA created a time machine so that it could travel back to World War II and bomb Pearl Harbor in Japanese warplanes. This was an insidious plot to frame Japan for the attack so that the US would retaliate and destroy the country. While EA hoped this would mean that all Japanese videogame competition in the future would cease to exist, all that it resulted in was Final Fantasy III not being released in the United States until 2007 on the DS. EA considered this evil enough and let it come to pass. Evil is sometimes lazy.

12: Instruction booklets for EA games are printed with the flesh of charity workers.

13: EA has kidnapped John Madden’s wife and children in order to force him to keep promoting the company’s football games. Every Thursday, Electronic Arts emails Madden a photo of his family, who are currently made to do motion capture work for the next ten thousand Boogie sequels. He is allowed one phone call a month to what he believes is his wife, but is actually Tiger Woods putting on a high voice.

14: Electronic Arts executives have been known to meet women and fall in love. They will then marry, have children and raise a happy, perfectly serene family for ten years. On the eve of their tenth anniversary, however, these executives will commit suicide. The loss of life, in an EA exec’s mind, is worth the amount of suffering caused to a now widowed woman and several grieving children.

There you have it, fair readers. As if you ever needed a reason to hate the corporate machine known as EA, we have now given you fifteen of them. We are quite aware that the single, all-seeing eye of Electronic Arts casts its shadowy gaze over the pages of Destructoid from time to time, but we are not afraid and will stand up for the rights of every man and woman. We have put our lives on the line in bringing these vile truths to the public, but we will not be silenced. We will always speak out, and by God, we will triumph!

[Editor’s Note: Shortly after publishing this article, Destructoid writer Jim Sterling was found buck naked and dead in his home. He was discovered face down in his bathtub, floating in an overflowing mixture of his own blood and vomit. Despite the stab wounds in his back and eyes, Metropolitan police have ruled this a tragic, if visually disgusting, accident. Furthermore, any corporate executives found inside his home at the time wearing bloodstained suits are considered incidental to the not-crime and are yet to be charged with anything. This is an accident and we should not think about it being anything else.

Destructoid would now like to proudly welcome its newest sponsor, Belectronic Barts, and would like to assure its readers that this new business venture will not affect editorial content in any way. Tony Hawk games rock.]