It’s still as cold as ice

11 Bit Studios is no stranger to somber storytelling. In 2014, the studio released This War of Mine, a harrowing survival game inspired by the events of the Bosnian War. Rather than go a shade lighter for its follow-up, the developer doubled down on the grim nature of humanity with 2018’s Frostpunk. This city-builder — the developers don’t really consider it a real-time strategy game — cast players in the role of a leader who has to make tough decisions about who lives and who dies as humanity struggles for survival in the wake of volcanic winter. The game is grim, but that didn’t stop it from becoming a best-seller. With more than one million copies sold on PC, Frostpunk is ready to jump to consoles. It’s a move the developers aren’t taking lightly.

“We always knew we wanted to bring Frostpunk to consoles, even when we were doing the PC version,” explained Project Lead and Senior Lead Designer Jakub Stokalski during a recent interview in San Francisco. “Our resources are not unlimited so we focused on getting the PC version right. But at the same time, as soon as that game went out and did very well for us, we came back to this console project and started working on it. The first prototype wasn’t that great in the sense that we just locked in the controller and tried to go the easy way. Turns out it’s a lot of work to actually make it look and feel great on console and we really did not want to short change our approach.”

According to Stokalski, it took a lot of work for 11 Bit Studios to get Frostpunk running well on PC. For console, not only would the team have to deal with less processing power than most modern gaming PCs are capable of, but also translating the more traditional mouse-and-keyboard control scheme to an Xbox One and PS4 controller.

“Pretty much, we redesigned every part of the game to work with a gamepad,” he said, “and we were playing around with it and it was pretty fast. But then you have some of the world’s best players making their cities bigger and bigger, and because this is a game of challenge you’re pressed into some high-pressure situations, we wanted even more flexibility and precision with the controls, so we now use stuff not really present in the PC version like the express menu.”

The express menu aggregates every common action in the game. If there is something you do often, you’ll have quick access to it throughout the console version of Frostpunk. Stokalski gave me a demonstration of the game in action on an Xbox One X and he was able to piece together a small city with remarkable speed using just the control pad. The only action available at the start was “employment,” but with the precision mode for city structure placement and the optional top-down view, he had himself a nice but ultimately grim bustling berg in just minutes.

“We always had a hunch that a circular city design might be a boon when working with a controller, and we were able to do things with the game like top-down mode and precision mode that enables you to be really, really confident about where you’re placing your buildings without having the pressure of worrying about moving it a bit left or right.” 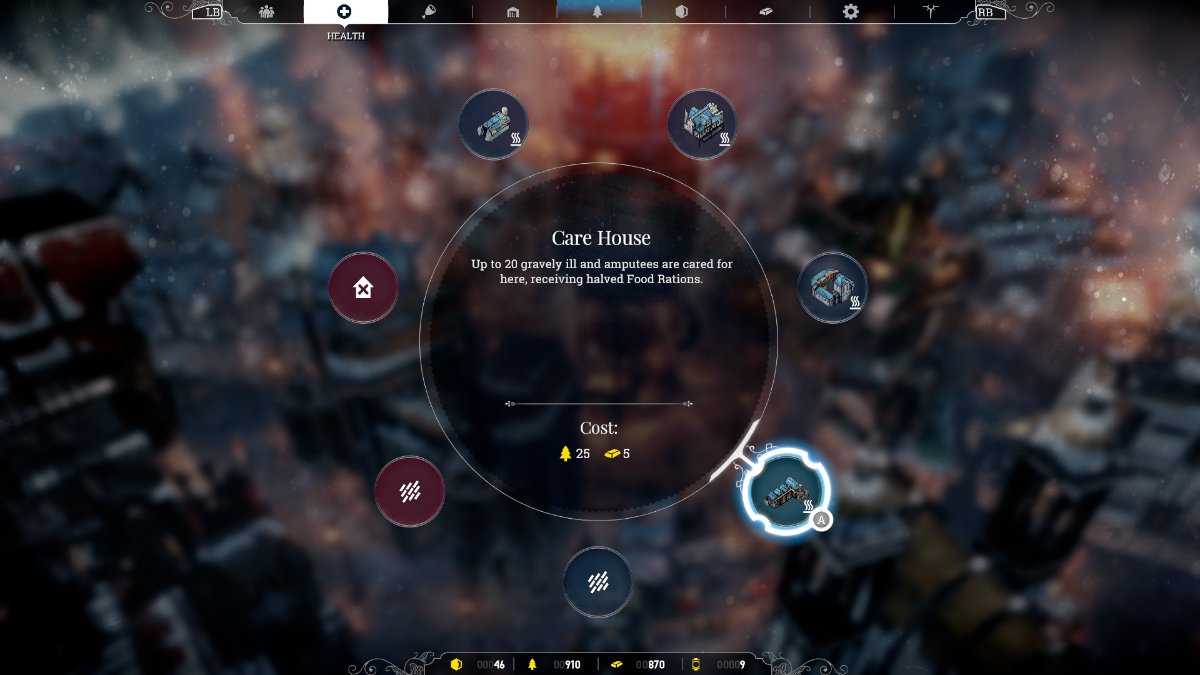 11 Bit Studios is continuing to tweak the controls as the game steamrolls towards its release. Stokalski said that in working on this version, the console controls have become second nature to him and that, while he is predominantly a PC gamer, he actually prefers playing Frostpunk with a controller.

“Just the simple fact that I’m not worrying about getting small movements perfect. This really is an experience for me that is more laid back, but at the same time, precise enough that I can focus and invest myself in the game.”

The team are also working to improve the graphics, to get the game looking as good on consoles as it does on PC. On the Xbox One X, Frostpunk retains its brilliantly bleak frozen landscape with snow and ice effects to really send a chill up the spine. As for the scale, Stokalski said the studio is making sure its preserved for the console ports, though I did notice a bit of digitization of the graphics as he zoomed out of his city to the greater map of the area. Nothing major, but it’s the only moment in the demonstration that didn’t look absolutely pristine. 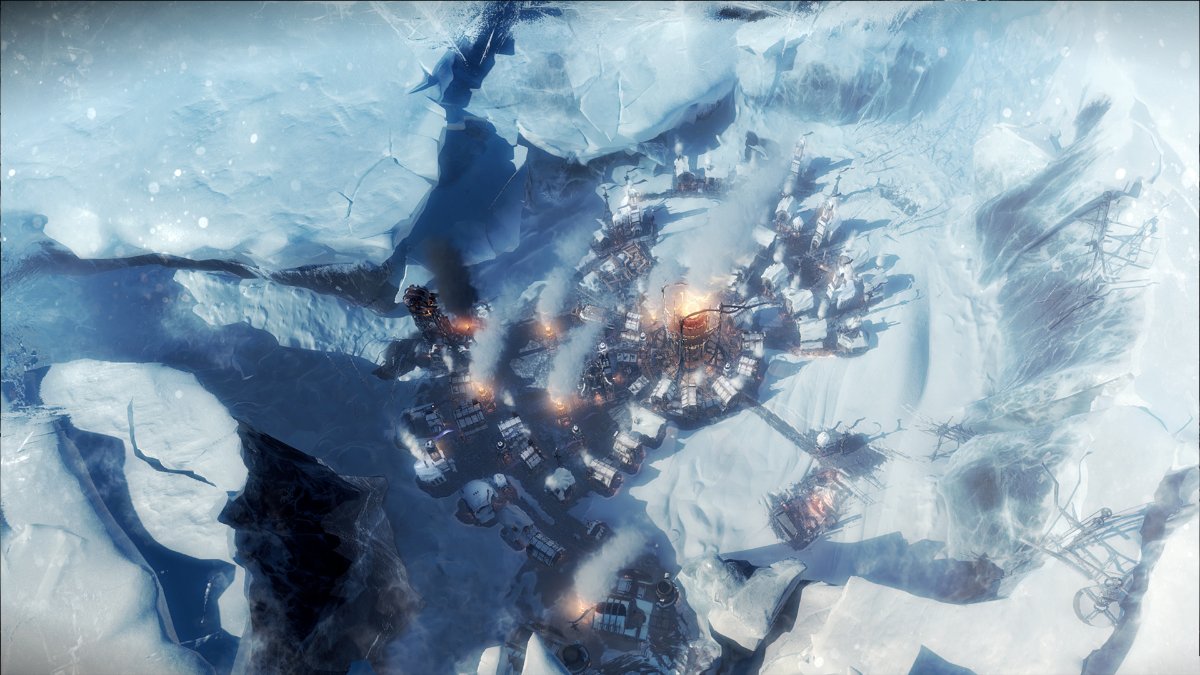 When Frostpunk comes to consoles, both digitally and physically, it will bring with it all the DLC released for the game so far. While the game will get a performance boost on Xbox One X and PS4 Pro, don’t expect it to support 4K. Also, given how much work it’s taking to get it to run properly on either of these consoles, don’t expect a Switch port ever.

“It’s a demanding game,” Stokalski explained, “and we’re fighting to get it running on this hardware and the Switch, as amazing as it is, is still a much weaker console basically.”

Even if it’s not coming to my current console of choice, I’m excited that I’ll soon have a chance to actually play a game I’ve been interested in for a long time. I’m an unfortunate Mac owner, so Frostpunk has evaded me since it launched last year on Windows. Knowing how much work the developer is putting into the console controls, to make it the best example of gamepad city-builder title, has only whet my appetite more. 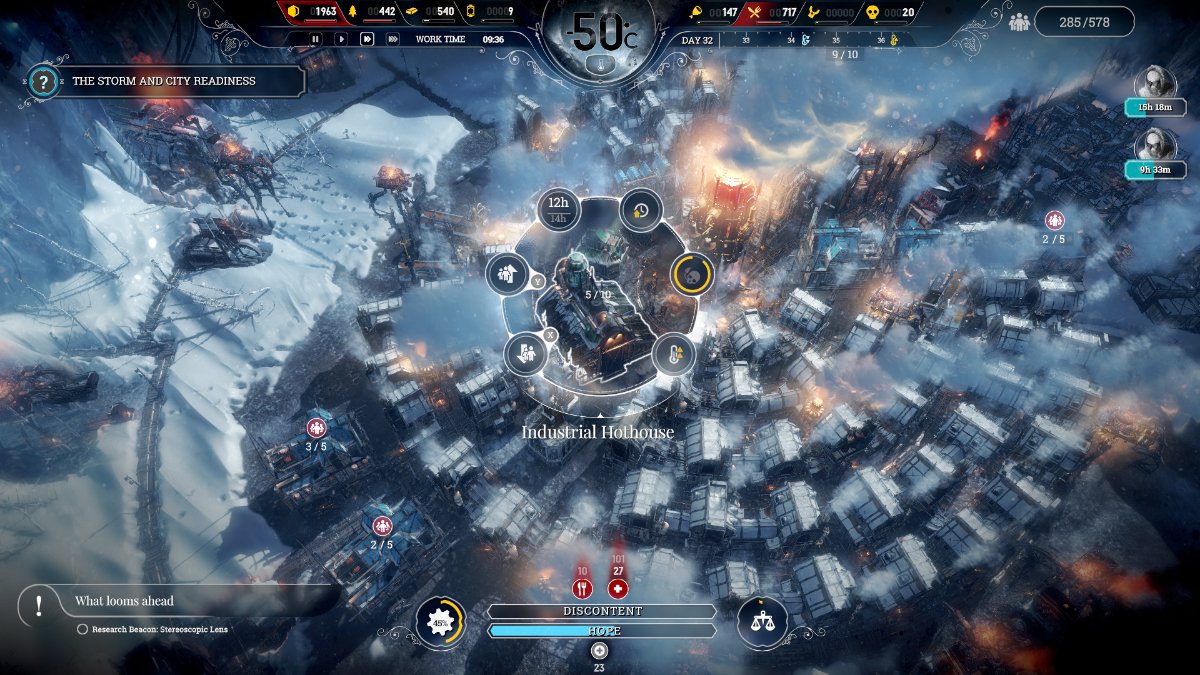 11 Bit Studios has at least two more “big” DLC packs planned for the game. Stokalski said he anticipates those will hit PC first with console releases to follow not long after. Because Frostpunk is known as one of the harshest and gloomiest games on the market, I asked Stokalski if his team planned the lighten the mood with its next set of downloadable content.

“Well,” he said, “it’s certainly not going to become a Disneyland simulator.”

Stokalski said he anticipates sending the title in for certification in the next couple of weeks. If all goes according to plan, he anticipates Frostpunk will see release on PS4 and Xbox One before the end of summer.