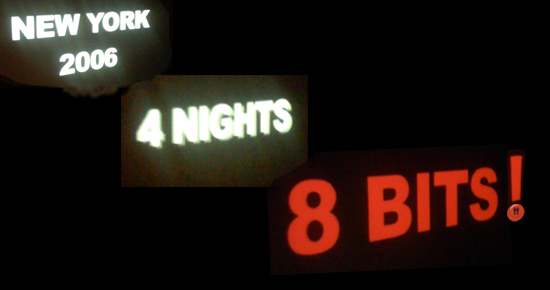 Last Friday, those in attendance at Pulsewave, The Tank’s monthly chiptunes showcase, got an extra treat when the crew from 2 Player Productions ran the trailer for the Blip Festival 2006 documentary between sets.  It was an unexpected surprise, so the snapshots I took were all of the shaky phone camera sort.

The DVD is slated for release just in time for this year’s festival. Blip Festival 2007 runs from Nov. 29 to Dec. 2, and was moved to the EYEBEAM, a larger gallery space in Chelsea. The four-day lineup has not been released, yet, but if last year is any indication, there will a great number of artists one wouldn’t want to miss. Start planning!