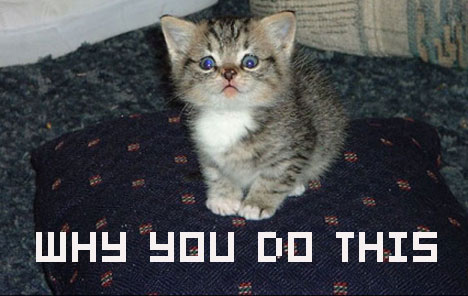 WiiWare has been going strong since its recent debut, unleashing a string of interesting new titles and making a lot of gamers who had kind of forgotten about the little white system take interest again (me included). It seems they have no plans to slow down, either — according to Nintendo Senior Project Developer Tom Prata in a recent IGN interview, there are currently about 100 games in development.

While that is hardly surprising news, Prata replied to a question about the storage issues with the Wii with a disappointing answer, saying that consumers could either delete games to make room for more or store them on an SD memory card. While that solution technically works, it seems odd that Nintendo wouldn’t take this opportunity to sell us an external storage device. After all, we could drown in the number of accessories on the market, and this one would surely beat the tennis racket for usefulness, yes?

Of course, talking to Nintendo is kind of like having an argument with a frustratingly polite ex-boyfriend — they evade the majority of your questions and send you on your way, leaving you wondering what happened and why you don’t have any answers. Unfortunately, you can’t throw a pot at their heads in a rousing household battle, but you can ponder the curious weirdness of their decisions with the rest of us.

Of course, despite 2K’s bold declaration that BioShock would never come to the PS3, it’s coming, so we can’t believe everything we are told. Do you think Nintendo is waffling, or do you think they really plan to leave consumers hanging for an official storage solution?