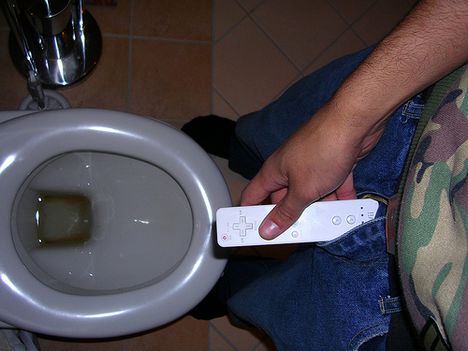 Trying to think of 100 reasons to love the Wii!? Good luck coming up with that … oh wait, somebody already did! How these guys were able to do such a thing is sheer madness. While some of their “reasons” may seem like a joke, the majority of the list is pretty solid.

Here are a few that made me laugh:

41. You can check the weather. Yes, there’s a Weather Channel on Wii, so you can see if it’s raining outside (and so decide to spend the day in playing Wii Sports).

68. The Sims. EA is creating a completely new Sims game just for Wii. Heaven knows what you’ll have to do with the Wii-mote to urinate…

91. Parental controls. Okay, this is bad news if you’re a five-year-old with a penchant for violent games. But good news if you’re a concerned parent wanting to stop Little Johnny or Janet from growing up as a murderous Emo suicide ASBO teenage hoodlum.

I suppose there is some good information hiding in the list, especially if you have been ignoring all of the Wii news for the last couple of months. But, if you already know everything there is to know about the Wii, then you might as well just print the article and make out with it.