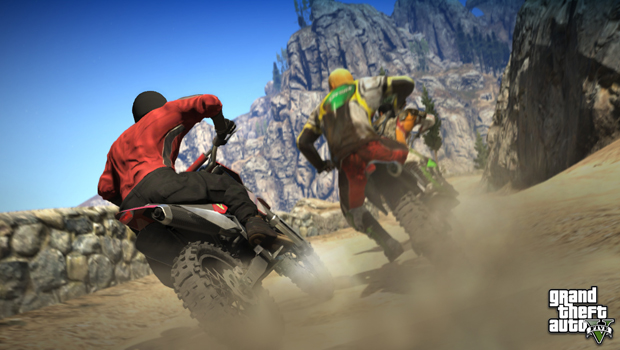 Rockstar has seen fit to verify yet another set of community-created jobs in GTA Online, giving them the official “Rockstar Verified” seal of approval — a much sought after title among Creators — and it is now available for all to partake in on Xbox Live and PSN.

There’s a nice mix of deathmatch and race-themed jobs this time around and includes a race called Long Haul 2, which Rockstar claims to be “the longest Rockstar Verified or Rockstar Created race in GTA Online.”

The full list of newly verified jobs, with links to each one, can be viewed below. Anyone given some of these a go yet?

Beach Side Race – created by papa_salada
After a quick tour of the Vespucci Canals, motorbikes and ATVs can really open it up along the coastal road from Vespucci Beach North to the Pacific Bluffs in this Race. We think papa_salada has picked the perfect vehicle class for this track, as the two and four wheelers can use their fearsome top speed to get some serious airtime on the canal bridges and that tricky jump along the final straightaway.

Custom Freeway gymkhana – created by SaltedCracka
With eight races already under his belt, SaltedCracka’s experience with the Creator tools are on display here. This short technical race around the docks features neat changes in elevation, a well-placed jump that fits perfectly with the flow of the race and some narrow, tricky turns that require deft use of the brake pedal. SaltedCracka has set the default vehicle as the Sultan – an excellent choice for drifting around the corners. The description for the Job pinpoints the final turn as the opportunity to “take it all and be #1”. Sage advice.

From Weazel to Weazel – created by cionyes
This tour of Los Santos and Banham Canyon is a great example of how to place pickups in a GTA Race, and it’s clear to see why even prior to Verification the race has been played nearly 2,000 times. Creator cionyes hasn’t just randomly peppered the course with pickups, instead choosing to place them in groups just before wide open avenues. This allows players to open the throttle, or open fire on the long straights and really make a play for first position. In the final dash through Banham Canyon opt for rockets instead of speed boosts to thwart the front-runners just in time to take the checkered flag back at Weazel Plaza.

Rush Hour – created by YouStupidFatFuk
Choose your vehicle carefully as tight handling is required to navigate the twists and turns on this long tour of the Los Santos highways. In what feels like a nod to “The Commute”, one of the more popular races in GTA Online, the civilians of Los Santos aren’t your only worry as up to 15 other drivers battle along the freeways. Expect a lot of paint to be traded along the way.

A thrilling and chaotic race that goes from Los Santos’ town center up into the hills for some alternative agriculture before racing back to Hawick and a rendezvous with your friendly neighborhood “pharmacist”. Keep an eye out for some magnificent views of the Vinewood sign as you ride north into the hills.

The Pad of Death – created by DatBread
An anarchic Deathmatch down at the Los Santos docks filled with an arsenal of powerful weapons, explosives and grenades. While there’s a healthy dose of chaos, there’s also enough cover to afford tactical play; the terrain is littered with trucks and containers to allow for some surprise attacks and melee kills. Top tip: watch out for campers on the highway overpass and be sure to grab a Sniper Rifle or RPG from the jetty to take them down.

Horseback Hell – created by Misterbocs007
Misterbocs007, a representative of the Payne Killers Public Crew, shows his considerable Creator skills with this Team Deathmatch at the Paddocks just off the Senora Freeway. Items and pickups are grouped together close to spawn points and behind cover. These reload points encourage respawning players to immediately re-enter the fray, while players who have survived a firefight can retreat to this cover to restock before the next round. For an extra kick, huge gas tanks litter the map – aim a few volleys from the grenade launcher in their direction for some satisfying multikills.

There’s certainly a slasher flick feel to the locale for this Deathmatch – an abandoned lodge in a remote forest. We recommend playing this one at night with the rain coming down for the full effect. We’ve seen a lot of melee-weapon Deathmatches created in small flat enclosed spaces, but fencing around the Bayview Lodge makes for an altogether different proposition. For those who prefer more explosive weaponry, pick up one of the Grenade Launchers from either end of the oval enclosure and launch them indiscriminately towards the center, or grab an Assault Rifle in the middle and clamber on to the steep pitched roof to get a vantage on the battles below.

Woodbury – created by RussianConcussin
RussianConcussin has created a Team Deathmatch with a story all of its own… A small town in the Blaine County Wilderness has been fortified with barriers positioning one team as the conquering aggressor, and the other as the defiant defenders of their fortress. This is a game of territorial control and teamwork, particularly if the lobby leader follows RussianConcussin’s recommendation to force players to start with knives and pick up more powerful weapons as they move through the map.

Long Haul 2 – created by Paradis_420
Get your Cheetah, Entity XF or Adder tuned up for the ultimate Supercar endurance test. There’s almost no need to take your foot of the gas for the entire 12 minutes of this Race which is now the longest Rockstar Created or RockstarVerified Job in GTA Online. The key to winning lies in the ability to maintain concentration, and to negotiate the traffic while still flying at top speed. Keep an eye on the minimap though, as your opponents will come hurtling past just as you’ve settled into your comfort zone.