A list of the most challenging boss fights ever is necessarily flawed. I, of course, have not played every video game, and I have not encountered every boss fight in the video games that I have played. I am also only one person, and I can only speak for my own experiences. I have watched other players blitz through boss fights that took me hours and vice versa. By its very nature, this list is subjective and very personal.

Still, I’ve played an awful lot of video games, and I’ve bumped up against an awful lot of bosses. I may not be able to compile an objective, definitive list, but I think I can offer a pretty good one. With that in mind, I’d like to take a trip down memory lane to revisit some of the most frustrating big bads I’ve ever had the displeasure of fighting. 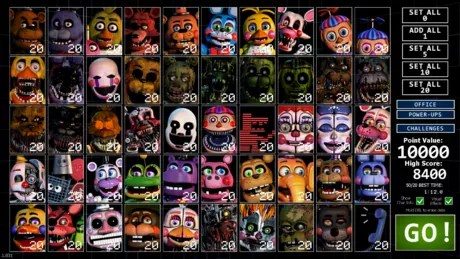 Ultimate Custom Night acts as something of a digestif for the Scott Cawthon-helmed era of Five Nights at Freddy‘s. The game features a grand total of 50 discreet enemies whose behavior can be tweaked by the player. Setting all 50 enemies to level 20, their maximum level of aggression, allows you to try out 50/20, the most demanding single night in Five Nights at Freddy’s history. It’s pretty tough.

FNaF, at its best, is a series about balancing spinning plates, and playing through 50/20 means balancing a truly incredible number of plates. All 50 foes require different reactions, and it’s nearly impossible to keep up with each of them at their most aggressive. It’s a nontraditional “boss fight,” but a truly challenging one. 9. Thunderblight Ganon – The Legend of Zelda: Breath of the Wild

I’m not a big fan of The Legend of Zelda: Breath of the Wild‘s combat. The game is a wonderful physics sandbox, but I’ve always found it a bit lacking as an action RPG. My distaste for the game’s so-so fighting is at its peak in the ridiculously frustrating Thunderblight Ganon fight. The other three Divine Beast Ganon fights are reasonably forgettable, but this one is memorable for its controller-smashing difficulty.

Thunderblight Ganon is incredibly quick and incredibly strong. Getting shocked in its first phase is basically a death sentence, which means dodging and flurry-rushing is just about the only viable strategy. Later phases are even more irritating and gimmicky. This is one of those boss fights that’s both very tough and very annoying. Speaking of tough and annoying…

Kingdom Hearts is another action RPG with combat that I just don’t jive with. The movement is subpar and the camera is utterly miserable. It’s generally not too tough to push past those issues in the main game, but the optional bosses are downright irritating. Sephiroth is easily the most difficult of these, demanding that the player learn every intricacy of a distressingly inelegant combat system. Yes, of course FromSoftware is on this list. Not to spoil too much, but FromSoftware is actually on this list a few times. The studio’s most recent game, Elden Ring, is littered with obscenely difficult boss encounters. Many will no doubt wonder how I could leave off legendarily tough battles with characters like Malenia, Blade of Miquella or the Elden Beast.

Truth be told, I can’t include those fights on this list because I never got to them. I got stuck on Starscourge Radahn, who likes to obliterate my beloved horse without a second thought. I’m sure there are tougher boss fights in Elden Ring, but I’m not sure when (or if) I’ll ever encounter them. So Radahn gets the spot. There are plenty of ultra-tough boss fights in Cuphead, but the penultimate challenger, King Dice, has to be the hardest. That’s because King Dice isn’t just one deliriously challenging enemy – he’s somewhere between four and ten.

The King Dice battle is actually a boss rush comprised of randomly selected mini-bosses. There’s an outside chance that you might get lucky and only face easy enemies during this fight, but you’re much more likely to get wiped out over and over again, forcing you to start over from the beginning. The final battle in Cuphead is pretty tough, but this second-to-last fight is the one that truly tests you on the skills you’ve developed to this point. There are a few optional bosses on this list, enemies that you must seek out for yourself. Few bosses are quite as optional as Sans, though. In order to face Sans, you have to kill every single enemy in Undertale, undertaking the “Genocide Run,” a route that is significantly more challenging (in terms of both gameplay and emotion) than anything else in Undertale. I told you FromSoftware would be back. “Dark Souls” is practically synonymous with “tough boss fights,” and the double-header that is Ornstein and Smough might be the toughest boss fight in the entire series. In the first phase, you’ll challenge two absurd powerhouses at once. After you bring down one of them, the fight gets even harder, since the surviving enemy becomes ultra-powerful in the second phase.

Ornstein and Smough is one of many choke points in Dark Souls. It’s where tons of players bounce off simply because they can’t progress (I’m happy to announce that, unlike Starscourge Radahn, I actually have beaten these two). Once you get past this point, though, you are truly ready for anything Dark Souls can throw at you. I promise the outsized presence of Kingdom Hearts on this list isn’t just a consequence of my fondness for the series. Some of these boss fights really are astonishingly difficult. Yozora, the final boss of the Kingdom Hearts 3 Re:Mind DLC, is one such duel.

The original Kingdom Hearts 3 is laughably easy. The game’s impressive combat system is held back by the fact that there are very few compelling fights in the campaign. Thankfully, the post-launch DLC offers up plenty of excellent opportunities to flex your Keyblade mastery. Yozora is lightning-fast and his crossbow attacks deal a ton of damage, making this one of the most challenging boss fights ever. Also, he’s voiced by Dylan Sprouse in English. Kinda weird. Ultrakill, the super-fast, super-violent indie darling FPS, has plenty of memorable fights. The most memorable, though, has to be Gabriel, Judge of Hell, the final boss of Act II. Gabriel is yet another super-quick high damage dealer who demands that you make the most of your toolkit.

Thankfully, your toolkit in Ultrakill is immense. Bringing down Gabriel by making the most of the weapons at your disposal is extremely satisfying – but you really need to know what you’re doing to get to that point. Bring it in for FromSoftware’s third and final appearance on this list! Sekiro: Shadows Die Twice might be FromSoft’s most difficult game ever, and the final boss, Isshin, the Sword Saint, is the perfect culmination of the game. Sekiro really asks that you meet it on its terms, and Isshin exemplifies that philosophy expertly.

This fight demands a comprehensive understanding of Sekiro‘s combat, from parries to Mikiri Counters to lightning reversals. It is what all good final boss fights should be: a test to see what the player has learned. Remember: hesitation is defeat.