My ears are (not) ready

When the Wii launched over 10 years ago (10 years!?), people were still unsure about the concept of motion control in video games. “What is this TV remote-looking thing? How will anyone play games with this?” The innovative console turned out to be a monumental success for Nintendo.

The single largest reason why they were able to convince so many people, not just hardcore gamers, that motion controls could work is that Wii Sports and the later Wii Sports Resort utilized the Wii Mote and Nunchuk in a variety of simple games based on sports that many people were already familiar with. Working motion control would not have been enough to reel in the casual soccer mom audience, however. The games were fun and approachable in their own right. You wanted to come back to play them again and again.

Nintendo Land set out to do the same for Wii U, showcasing a variety of ways the second screen could be used to enhance gameplay. Neither the console or its bundled proof-of-concept game performed nearly as well as their predecessors, but the game was still received favorably for having fun, unique content in single player, co-operative multiplayer, and competitive multiplayer. All modes made use of the gamepad in a variety of interesting applications.

1-2-Switch looks to take on the proof-of-concept role for the Nintendo Switch this time around, featuring a number of competitive mini-games designed using the various input methods available on Switch including motion control, infrared sensors, and “HD rumble.” Unlike its predecessors, 1-2-Switch will not be included when you buy a Switch.

It is sold separately for $50. 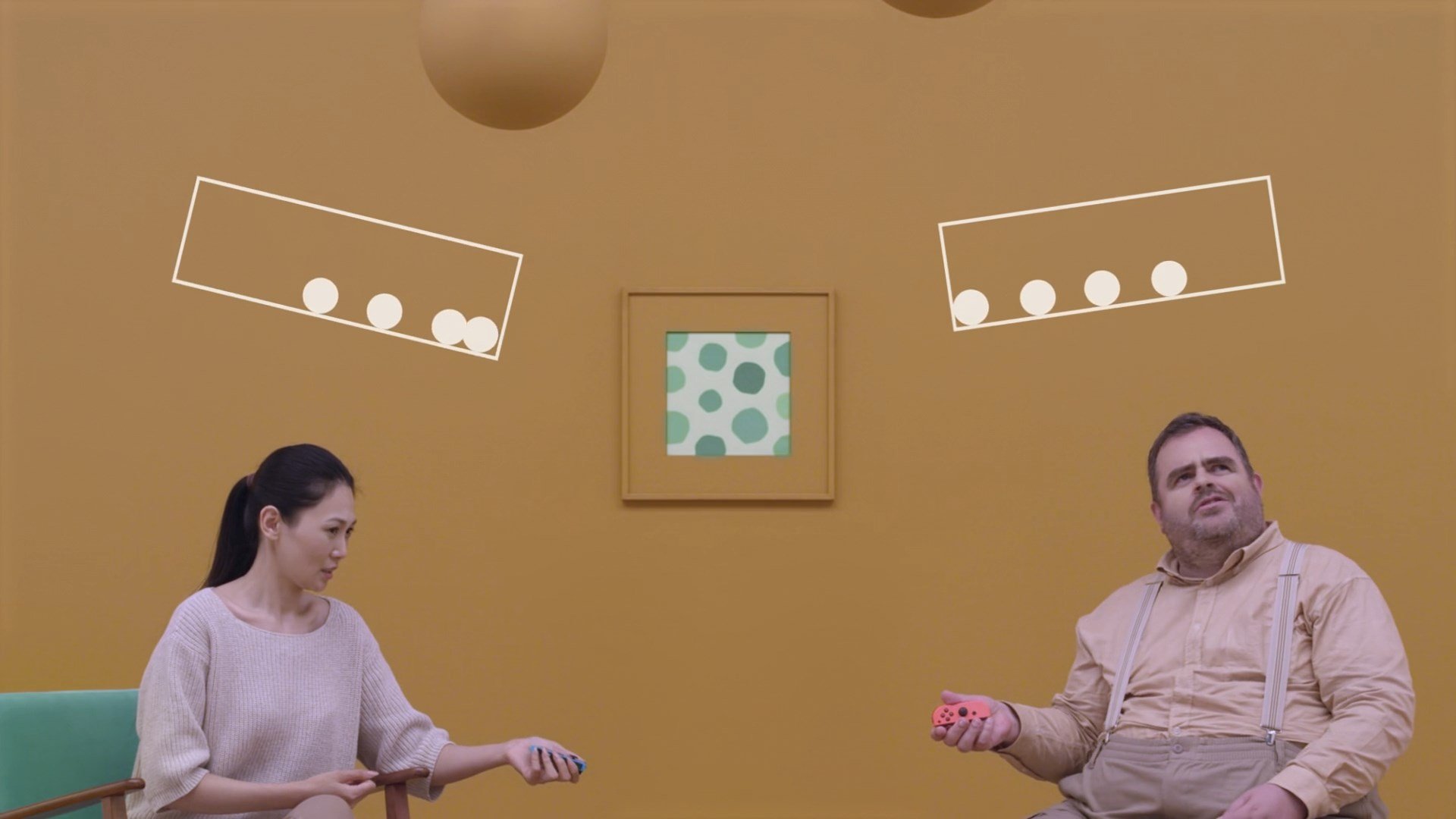 Being the center attraction at the free public Switch event located in Tokyo Big Sight meant there were a whole lot of people wanting to try it out. Unlike the maze of TVs dedicated to Zelda: Breath of the Wild, there were only eight stations hosting a specific mini-game from the party pack. Players were given tickets to chose and play any two mini-games they wanted, but not before a lady came out dressed as a cowgirl trying to explain this witchcraft to those not overly familiar with the game.

The first game I wanted to play was an easy choice: the ball counting game. If there is an official name I am not aware of it, but this was the only game in the whole event where people could feel the “HD Rumble” for themselves. I already went into detail of what I thought about HD rumble in my preview of the Switch console, so I’m going to stick to the game itself here. I and one other guy were sat down in front of a Switch in “tabletop mode” and each given a single Joy-Con.

The game started before I could even settle in, and then suddenly there I was tilting the Joy-Con back and forth in all directions, trying to deduce the number of imaginary balls that were in my imaginary box. They give you quite a lot of time, but I nearly used it all up both trying to count the balls and wanting to judge the HD rumble for as long as possible. The guy next to me probably got annoyed. Whatever, he got it wrong too.

The tutorial video instructs you to hold your Joy-Con a certain way and input your guess by moving an on-screen counter left and right with the joystick before setting it on the table. Going up and down also works, so it really doesn’t matter how you hold the Joy-Con. The maximum number you can guess is nine, and there is no zero option as I recall, so assuming you can tell the difference between a box of one to four balls and a box of seven to nine balls, you’ll be able to make an educated guess at the very least. Otherwise you can just copy your opponent, who has the same number of balls as you and whose guess is shown on screen. My first thought was that they should give each player a different number of balls, but that wouldn’t be fair competition considering one player could get eight balls while the other could end up with an easily guessable one. 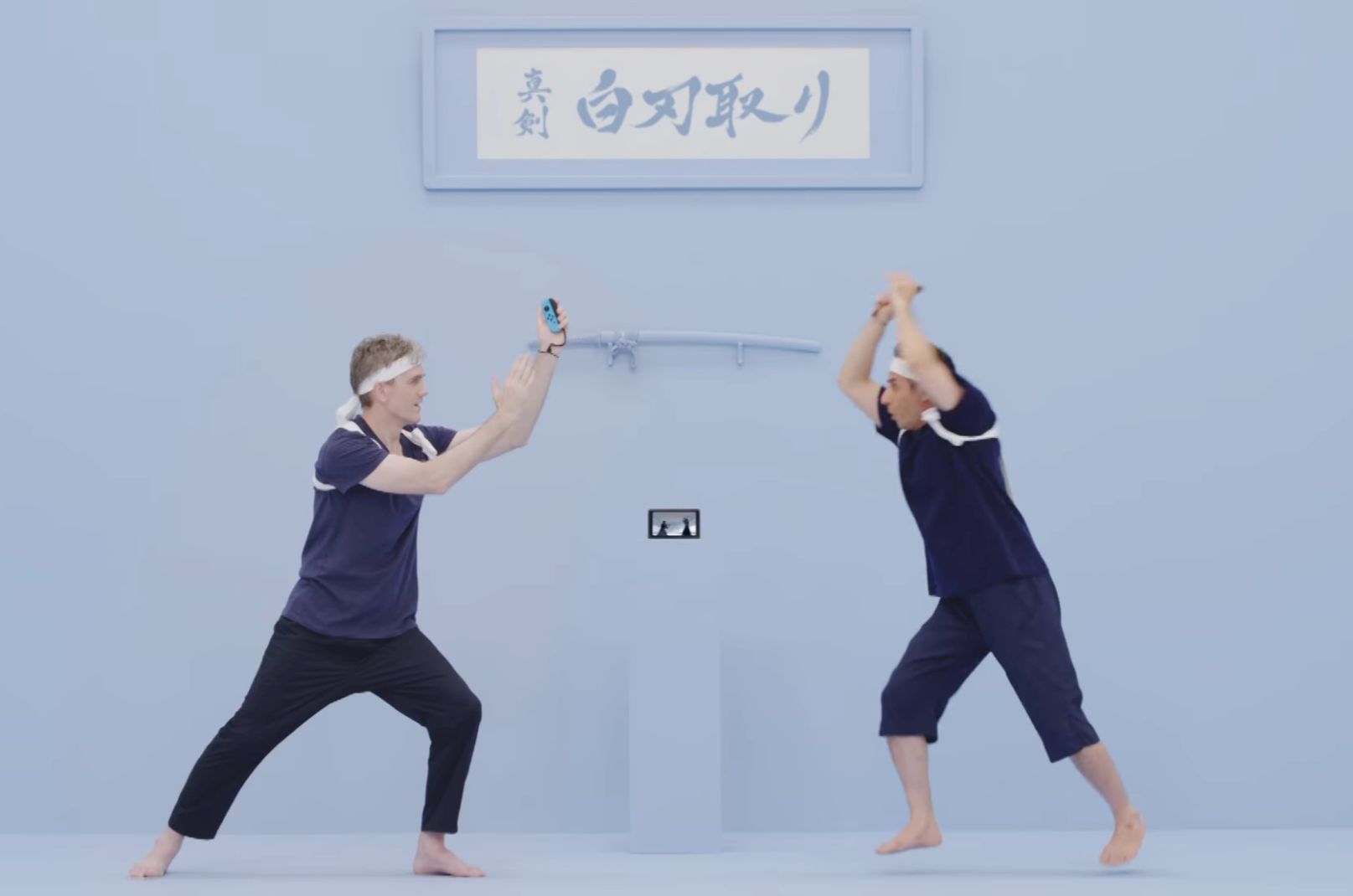 So what to play next? I had already seen and heard enough about the cow milking game, the sandwich eating game, and Wild Gunman that cowboy quick draw game. Thinking it would rely on precise motion more than the others, I went for the samurai game where two players swing imaginary swords at each other’s heads using a single Joy-Con. The offense is instructed to raise the Joy-Con katana above their head and swing downward at the opponent’s head whenever they are ready. The instructional video demonstrates this by having one of the dudes try to fake the other guy out.

On defense it gets weird. You place the Joy-Con flat in the palm of one hand and grip it tightly. When you want to catch the blade, you raise both of your arms up and try to clap the sword at an already-too-late neck elevation. In attempt to force lazy daisies to use both arms as intended, the defense must not only bring the Joy-Con up, but press in the joystick with the empty hand. Ignoring the fact that one could still do it one-handed by resting their thumb on the stick, this was an awkward input to perform. I had to make sure I didn’t miss the stick (like just tilting it instead of pressing it in) and also not hit it too hard to prevent damaging either the Joy-Con or my Joy-Hand, all while focusing my attention on the guy in front of me who could try to juke me and attack at any moment.

I played not with another event-goer but with the event staff: a Japanese speaking white guy contracted to wear samurai clothing and make you say “osu” and bow before playing. It’s his job to demonstrate the game, so he telegraphed the attack so easily that I could catch it, then obviously messed up on purpose so I hit him. That meant I won…I guess? It seems you go until one player gets hit, but what happens if the first person gets hit? I don’t know honestly.

Inputting the number for ball count is about as much screen interaction there is for the game. Stuff like quick draw does show guns, but on-screen graphics are mostly limited to scoring and winner declaration while players are often encouraged to look at their opponent. Those live action videos you see of people in colorful garb and environments playing these mini-games in the trailer are in the game as tutorials not unlike the short animations that play before a Mario Party mini-game begins. They are a little long, but in my opinion clearly explain how to play the game in a visual way. 1-2-Switch wants to use the screen as little as possible, so sadly Mii’s have been given the boot. I really don’t know if abandoning the screen is such a good idea though. 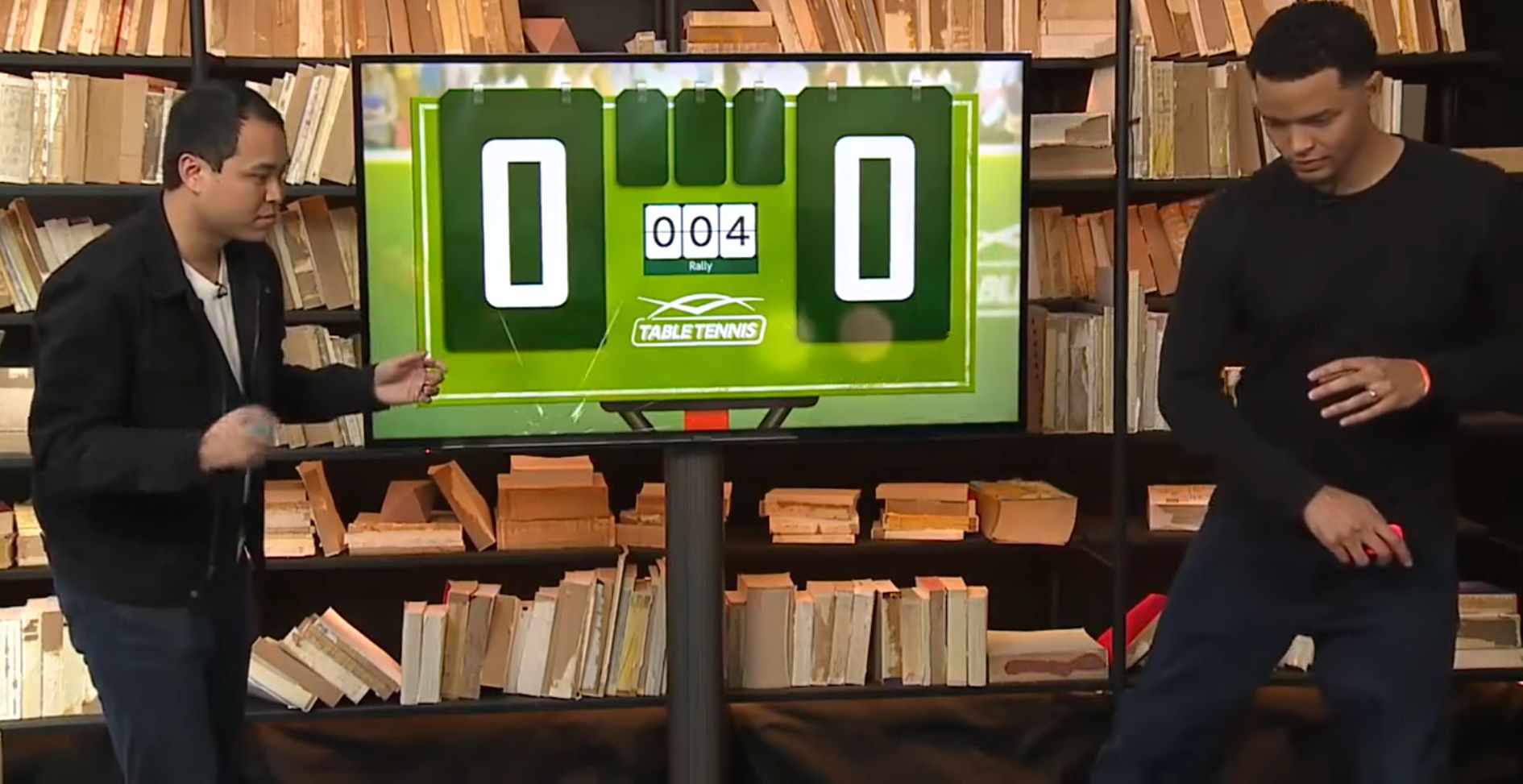 In a social environment, it’s going to be difficult to hear well enough to play many of these games. In the Wii Sports games, graphical manifestation of actions such as bonking an enemy Mii on the head with a sword or conversely your own Mii taking just such a blow is satisfying visual feedback that communicates your performance. Doing the same with sounds and some rumble (which I didn’t notice much because I was too busy moving my body)  gives no visual feedback as the person in front of me was not actually hit by anything and I had to be told if I hit him or not.

It’s not as clearly communicated, and not as much fun. Even board games have some sort of visual representation of what players are doing: you hop your piece around the board, knock other pieces over, and place houses on property. Playing 1-2-Switch feels like playing with a plastic gun that makes “pew pew” sound effects when you pull the trigger, or rather like playing laser tag with only two people and not actually being able to move about freely.

All that aside, even if there was more visually or if you like the idea of playing with only audio, the games themselves are one-note and not compelling enough to make me want to play a second time. Unlike the Wii Sports games or Nintendo Land, mini-games in 1-2-Switch are the same thing no matter how many times you play. There is no single player, no progression, no rewards, nor added challenge. Pretending to milk a cow is not a game to me, nor is it fun. Counting balls is not a game. Posing is not a game. These mini-games are too light to even be Mario Party fodder. I never felt any rush nor desire to “win” as I did in Arms, Nintendo Land, Wii Sports, or most video games for that matter.

Whereas Wii Sports and Nintendo Land focused on making lots of creative single player, co-operative, and competitive multiplayer content focused around a single feature, demonstrating all the ways it can be utilized to create new gameplay paradigms, the mini-games of 1-2-Switch are purely competitive with less depth and less focus. Instead, it briefly touches on a few different functions that wouldn’t stand as big console features on their own. That includes the motion control we no longer need to be convinced of, especially in mini-games far worse than what we played on Wii Sports 11 years ago.

At best I could see playing a few of these mini-games once each with my family, who had a great time with Wii Sports and Jackbox Party Pack. However, I know they would be quickly bored and confused, ready to go back to more Drawful.  I went in with an open mind on this idea of audio games, but I’m frankly just not interested in playing anymore 1-2-Switch. Especially not for $50.