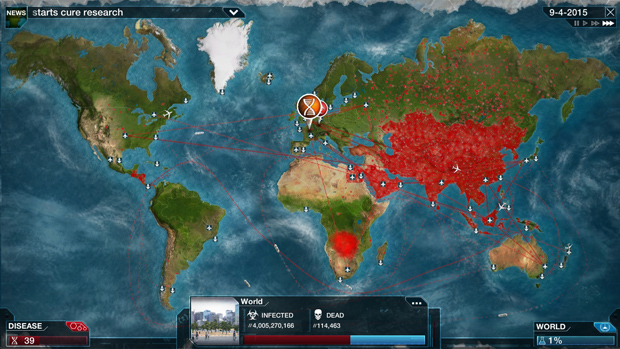 How ’bout that narrator?

Today is February 20, 2014, otherwise known as the day Plague Inc: Evolved came to Steam Early Access. It’s $14.99 in its current “stable and polished” but feature-incomplete state.

Developer Ndemic Creations has explained what’s available in-game now and what content is still on the way: “At the moment, you can play all of the core single player game with seven disease types and three cheat modes — redeveloped from scratch for PC with significant enhancements. In the coming weeks — we will be releasing regular (free) updates which will add in cooperative and competitive multiplayer, the mind-controlling Neurax Worm, zombie-making Necroa Virus, Speed Runs, Scenarios and the Custom Scenario Creator along with lots of other brand new features.”

If that sounds reasonable enough to you, here’s the obligatory link to the Steam page. Some people seem none to happy with the price point, as anticipated. Ndemic believes $14.99 to be “a fair price” as Evolved has all of the mobile game’s expansions, new stuff like multiplayer and scenario creator, and “loads of new content updates” planned down the line.