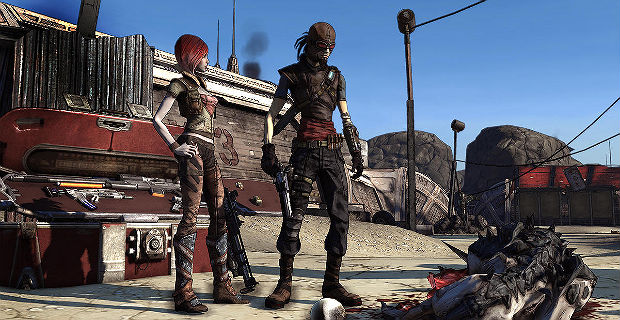 Let’s get right to the point: Borderlands is sh*t-hot. More and more, I’m beginning to think that the game’s surprise makeover was really just a clever ploy to get people to pay attention. If so, I’ll be Goddarned if it didn’t work. While Cliffy B and BioWare’s Ray Muzyka are busy pontificating about whether or not the RPG and FPS genres are blurring together, Randy Pitchford and Gearbox are making it happen — check out GameSpot‘s exclusive new trailer after the break.

To be honest, I really want this game because I can play it with my girlfriend. In an interesting role reversal, I’m the RPG buff, but she’s a fragging machine (although I’ve finally convinced her to play Final Fantasy IX). Since the game has local and online co-op, the two of us (and two friends) can get together and have the best of both worlds. I can only hope that it will be as blissful as my imagination makes it out to be.

If you haven’t been paying attention to Borderlands, here’s the quick-and-dirty: it’s a sci-fi steam-western that  takes place on a desolate planet, but the hook is that all of the areas to explore on Pandora are randomly generated (like Diablo), as are the guns. If the final product is anything like I hope it is, you’ll get great twitch shooting with the strategy and resource management of an RPG, as well as access to “87 bazillion guns,” as the trailer proudly exclaims.

Speaking of the trailer: it’s badass. It simply oozes style, and it makes me more excited than ever. Does anybody know what the music is? It doesn’t show a lot of gameplay, but, in an interview with Nick, Gearbox chief Pitchford made it clear that it would be top-notch: “When I move right or move left or rotate my view or pull down the trigger and look down my sights, it’s just totally natural. And this is because it’s our lineage, you know, that’s what we do.”

In any case, the game hits U.S. shelves on October 20th, and will storm Europe three days later. If that awesome dancing robot from the trailer is anywhere in the game, it’ll be worth the $60.