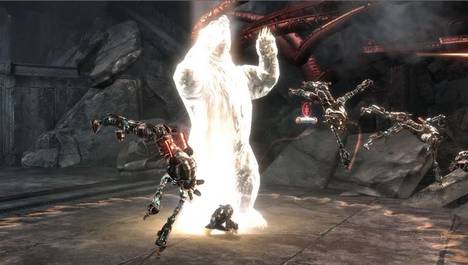 First off, no, I did not get to use the Polar Bear attack.

Anyway, Too Human has received lots and lots of attention over the years, but not much was being delivered. I was starting to believe that Too Human would end up as vaporware, but as it turns out, Too Human is finally coming out this August.

So then, the big question on everyone’s mind: How was Too Human? Was it total sex or was it just a “meh”? You’re just going to have to click the link that says ‘read full story’ to find out. 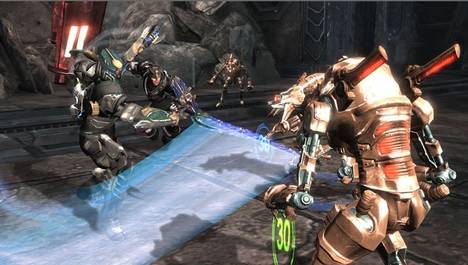 Before we got to play, Denis Dyack quickly gave a run down of what we were about experience. He first brought up the fact that Too Human has gone from a four-player co-op game to a two-player co-op game. Denis stated that because of all the stuff that can happen on the screen, it can get really confusing trying to play the game with four players. By the time I was done playing, I kind of understood what Denis meant, but it wasn’t that bad. This could easily be a four-player co-op game from what I saw.

After showing off a few tactics players can use in the game, it was time to finally play. You’ll have the choice between five different classes each with different skills and attributes. I went with the Champion class, as it was the most well-rounded of the five. A long opening cinematic plays, with your character and a team of soldiers eventually descending into a snow-filled valley and entering a large temple structure.

After about a minute or two inside of the temple, you and your group are attacked by the enemy and it’s time to check out the combat system. You have two main attack systems: your gun, which is controlled by the trigger buttons, and your sword, which you use the right stick to control. 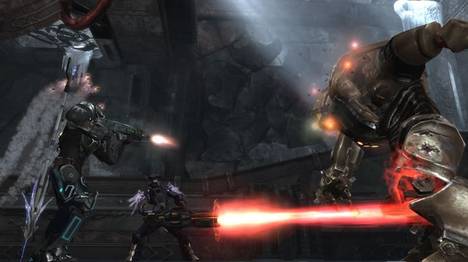 The guns at this stage are relatively weak, but the sword will take enemies out with ease. I really found the sword combat hard to get used to since it’s dependent on the right stick. When you’re surrounded, quick thrusts of the stick in the direction of your enemy will have your character hit them, cycling through the enemies quickly. If you hold the stick in the direction you want to attack longer, your character will glide towards the selected target where you quickly slash the enemy and then glide on over to another selected target.

Doing combos and juggling attacks will get you more skill points, so it’s a good idea to flick an opponent up into the air and then take out your guns and blast them until they die. Enemies will drop various items that you can pick up and will go to upgrading yourself and your weapons.

Other attacks will include a Battle Cry attack, where, once activated, you’ll inflict double the damage and your unit will also receive the same extra powers all for a short period of time. 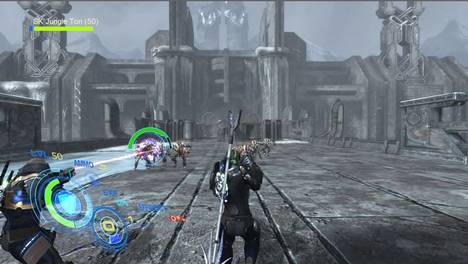 As you go through the game, you receive more skill points that will go into feeding your skill tree. You can have a balanced tree of magic, sword and gun attacks, or focus only on specific skills. Increasing any of these categories will open up new weapons and new skills, which you can use in battle. Upgrading your guns will get you a powerful laser beam, upgrading your swords will get you a giant hammer, upgrading your other stats can unlock Spider Bots, and so on and so forth.

I didn’t get a chance to use a Spider Bot, but the concept alone has me thrilled. There can be various Spider Bots, each with a specific skill. One can shoot at enemies, another has an anti-missile gun, and another has the ability to put a shield around you. Although they won’t be a big part of the combat, they do seem really fun to utilize.

As you progress through the levels, your character will have flashbacks that give more detail to the story. At least I think they’re flashbacks. One thing I still don’t understand about these types of events is why these demos are always out in the open with a bunch of other games and hundreds of people around. 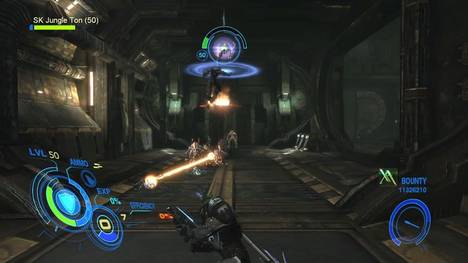 Anyway, after the scenes are over, we’re put right back into the game and you just continue on into the level. I wasn’t sure what the point of the mission was, as I couldn’t hear shit that was going on. Eventually I came across what I want to call a mini-boss. The mini-boss is a lot bigger than the regular enemies and has multiple points of attacks. In order to take them out, you need to focus on each limb.

The mini-boss kept handing me my ass when I went in for melee attacks so I stayed far back and shot the shit out of it. It was here that I noticed that it’s a bit of a pain to try and keep the selection on a body part steady. It’s very easy to accidentally move your aiming cursor especially when you’re running around.

After I took out this creature, it was time to move on from Too Human. A couple of other things to add is that the camera system isn’t perfect. The camera will move around a lot when you’re engaged in battle and after you’re done fighting, it will stay in place where it last was. That’s nice in combat situations for it to move, but often times I found that the camera was facing me so as I ran forward I couldn’t see anything. Simply pressing the left bumper will reset the camera directly behind you, but I don’t see why the camera wouldn’t go right back behind your character automatically. 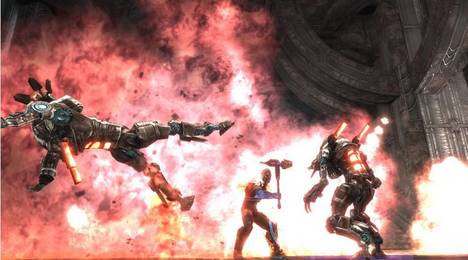 Another small complaint comes with the death system. When you die, this Valkyrie comes down from the heavens and picks your character up. Now, that’s cool at first, but there’s no way to skip it and that can get old really fast.

All in all, I’m still not sure what to think about the game. I did like it, but it’s nowhere near what the hype was trying to make this game out to be. I also had nowhere near enough time to really get an idea of the potential of the game. It seems like there will be a lot of depth to it and anyone that’s into Gauntlet Legends and the Devil May Cry series may like this.

Luckily, there’s a demo coming out prior to the release. Too Human is promising around 15 hours of gameplay, and up to 60 hours if you try to reach the level 50 cap. It’ll be dropping August 19th in America and August 28th for Europe.