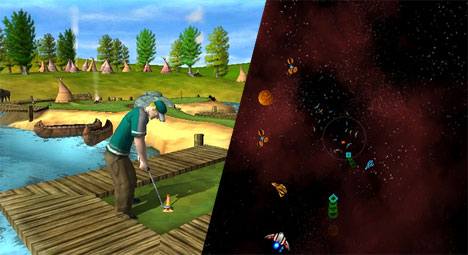 This Wednesday not one, but two new Xbox Live Arcade games will be released. It almost makes up for the XBLA game drought that occurred a few months back, doesn’t it?

Fans of the shoot-em-up genre will be pleased to know that the classic arcade game, Gyruss (400 Microsoft Points), has finally made its way to XBLA. But if you happen to be into the whole miniature golfing scene, 3D Ultra MiniGolf Adventures (800 Microsoft Points) is right up your alley.

For a more detailed look at both games, check out the press releases after the break.

Defend the Galaxy with “Gyruss” on Xbox LIVE Arcade

Nearly a quarter century ago, gamers who wanted to travel throughout the galaxy needed only to plunk a few coins into an arcade machine. This week, gamers will be able to travel through space from the comfort of their own living room when “Gyruss,” the classic tube-shooter from Konami Digital Entertainment, Inc. launches on Xbox LIVE Arcade for Xbox 360 beginning Wednesday, April 18 at 0900 GMT (2 a.m. PDT).

In “Gyruss,” gamers fly a space ship from Neptune to Earth while battling enemies, satellites, asteroids and laser beam generators. Along the way the player’s ship can be upgraded to better tackle the ever-increasing enemies that attack during the journey to Earth.

“Gyruss” will be available worldwide for 400 Microsoft Points and is rated “E” for Everyone.

*Earn up to 12 Achievements and 200 Gamerscore points

Busting out the putter in ghost towns, outer space or at the carnival from the comfort of your couch has never been so much fun. “3D Ultra MiniGolf Adventures” from Sierra Online will be available for download on Xbox LIVE Arcade for Xbox 360 beginning Wednesday, April 18 at 0900 GMT (2 a.m. PDT).

“3D Ultra MiniGolf Adventures” will be available worldwide for 800 Microsoft Points and is rated “E for Everyone”.

*Earn up to 12 Achievements and 200 Gamerscore points