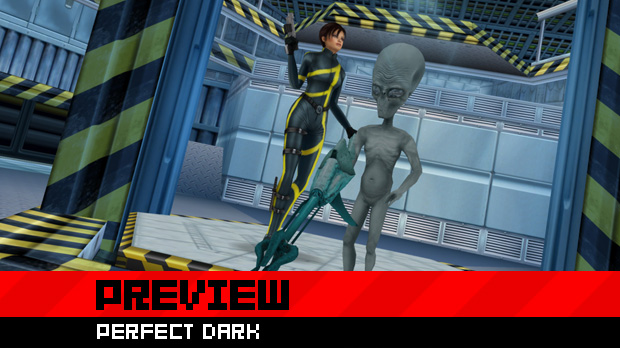 Back in 2000, when the original Perfect Dark came out, Rare was riding high. They had just come off the most successful console first-person shooter ever made, they and Nintendo were BFFs, and Perfect Dark was on everybody’s lips.

Fast forward ten years. Rare is now in cahoots with Microsoft, the last shooter they made was lackluster at best, and, well, the game everyone really wants is Goldeneye. So where does that leave us? With an HD update to Perfect Dark. Having had some hands-on time with the game, I can certainly say there are some neat things with this game, much more than I would initially expect.

I have to say two elements really made playing Perfect Dark better than playing any other N64 game on an emulator. First, my god, once we as gamers were free from the confines of four yellow c-buttons to control in first person and were liberated with modern control sticks, we could finally be playing a game instead of fighting it. Perfect Dark, no longer a clumsy and wonky FPS, is now a fast and accurate shooter. Damn. Other than a couple of dated control elements (weapon select is dumb), Perfect Dark controls lovely.

I only played the one level, but the game is now so fast and accurate with the use of dual analog sticks, it’s really easy. Almost too easy, considering the enemies have the A.I of a dead chipmunk. However, again, this is an old game. You wouldn’t go in here with illusions of Modern Warfare. However, from my time with the game, I had fun, and it was actually enjoyable to have bad guys that go down with a shot in the balls and disappear leaving only a bloody fart stain on the walls.

The second reason Perfect Dark is perfectly playable are the graphics. While the game still looks like ass in only that trademark ‘”N64 sort of way,” the addition of HD textures has turned it into something I can look at without wanting to die.

Sure, the game doesn’t look “great” in many frames of reference, but it looks great for being exactly what it is: an N64 title. Actually, the texture improvements have made the game look like a Dreamcast title, honestly. Not too shabby!

I wasn’t able to play the multiplayer, but expect 4-player online and local play, as well. Eh, it’s multiplayer. Ta-dah? Did you expect more?

Coming away from this port of Perfect Dark, I’m actually impressed with it. It looks like something fans will like, and as far as games from this generation go, it will be the best looking title of that type. I think it looks like a perfectly fine addition to the spring Block Party line-up next to Toy Soldiers, Scrap Metal and Game Room, and for only 800 points, it isn’t too bad.