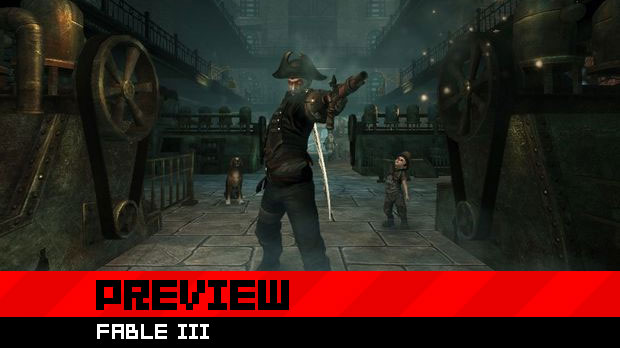 I hope you guys have been having a good time checking out the X10 information that has been flowing out like a stream of Microsoft-branded consciousness. Seriously, it’s kicking the butts of everyone who is going, and I’m doing my best to get you the best information possible. Round Two is coming soon!

Now, there’s a good reason you’ll want to hear about what I’ve got in store for you — I got a hands-off demo of Lionhead’s Fable III. While there was plenty that was not shown or only hinted at, there’s a whole lot that is exciting all the same. Hit the jump for my impressions.

In Fable III, you’ll play as the son (or daughter) of the main character from 2008’s Fable II. All of the standard stuff you’ve come to expect from a Fable game is here: the good and the bad, the multiple plots paths, the dog, co-op — everything.

Even better, you can import your save from Fable II, and you will be able to gain some extra features, as well as influence the state of your new main character. Not much changes, but in a post-Mass Effect 2 world, it’s a nice feature.

What is not coming back is a health bar, or a HUD… period. This is the big news that Molyneux said was going to piss gamers off. Honestly, it’s still hard to figure out how much health you have left, but there you go. In Peter we trust, I suppose.

The game is heavily inspired by Charles Dickens and the Industrial Revolution in that Albion is now a heavily industrialized nation due to the actions of the corrupt king. Children as young as five-years-old are working in factories, and at least ten a day are dying. Everyone is sad, and it’s up to you to make a change or keep things nasty as you progress through the game.

Molyneux made it very clear that there is a new theme in Fable III: power. “Power” runs through the whole game, and you’ll even become King or Queen by the story’s mid-point. Considering the HUD is gone, and also considering that XP is now AWOL in a traditional sense (more on that later), being a powerful leader is very important. You’ll be getting followers, and each action you take will cause you to gain or lose followers.

Let’s say you’re the king. If you had promised to close the factories employing children, open schools, and turn towns into the idyllic places they once were — and then you don’t come through — you will lose followers. If you divorce your wife, you will lose followers. If you marry a baroness, you will gain followers. There’s a lot going on, and everything will fluctuate as you play. I’ve been told that the number of followers is pretty much the clearest manifestation of XP in Fable III.

The game features two major updates to the Fable franchise. First, every weapon you use has an impact on you, the player. One of the complaints of Fable II was how even female characters would get really bulky. This changes with Fable III. Depending on the weapon type, you will bulk up or bulk down. A heavy hammer will “Conan you out,” while using a gun will make you a pussy-footed weakling. Magic users will become more… magical (much like the iPad). A mixture of weapon uses will also offer a mixture of physical traits. Also, now characters have wings called “extreme expressions.” They pop out when you do attacks, and will align to your good and bad traits.

This also ties to the weapons. Weapons initially start out weak and simple, and depending on what you do, the item will start to look and act different. If you kill a bunch of spiky Hobs and murder innocents, the weapon will be spiky and drip blood. If you kill a lot of another enemy, it’ll start to pick up those traits.

Even better, those weapons will be tied to your Gamertag, so your unique weapon will be called “[email protected]’s Blade of Blood,” or something similar depending on your chosen Xbox LIVE handle. Even when you trade it, that weapon will always be named after you. Molyneux also mentioned that the weapons are tied to your Gamerscore, but how those numbers translate into the game and with these weapons was made unclear.

The next, and biggest, update of Fable is the inclusion of the “touch” feature. Heavily inspired by Ico, “touching” is done with the right trigger, and it is a contextual interaction with the characters in the game. You can discipline your daughter or pick her up, or hug your wife. As King, drag peons down to the dungeon, and more. The flagship animation here is holding hands. You can walk your daughter back home, or you can drag a hobo to be sold to a factory. It’s supposedly designed to create more emotion, as well as man-on-man hand-holding, and looks like a core element of Fable III.

Oddly, there was no confirmation of an episodic rollout; Molyneux was very diplomatic and indefinite. After the episodic release of Fable II, it seems like a good enough guess.

An even more curious missing element was the lack of a mention of Project Natal. Or the support of Project Natal. Or something. See, while Molyneux was talking about the game, a representative was playing it. Almost every time a “touch” element of the game would happen, the player would move his right hand like he was holding hands with the character — for example, lifting up the child. I even saw him do a finishing move like an overhead smash with his hand. Was there a hidden Natal camera somewhere? I have no idea, but I’m going to speculate that players without Natal are going to be able to play using just RT, and Natal payers will have support for some “waggle.”

If what I suspect regarding Natal is true, I’m not really impressed. Of course, we won’t find out until E3, I’m sure, and I hope, Molyneux has some surprises in store that are better than what we’ve already seen with Wii motion.

The graphics have been boosted quite a bit, as well. While the last game had smallish, cramped dungeons, Fable III‘s are more expansive. The general world is pretty nice and lush where it needs to be. It’s obvious at a glance that this sequel looks much better than Fable II.

Fable III certainly has some pretty interesting new features, and it’s obvious that the game is going in some interesting directions. It’s also obvious that there is a whole lot that Molyneux is keeping close to his chest. Let’s see if the guy can follow through with all that he’s promised, and maybe deliver on the Natal stuff he’s hinted at.