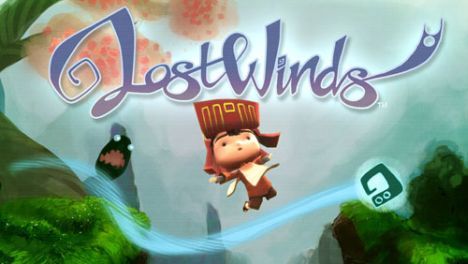 As excited as I was to see My Life as a King debut along with WiiWare, I was equally (if not maybe even a smidge more) intrigued by LostWinds, which I heard word of back in February. I downloaded it right away, and quickly found myself having tumbled down the rabbit hole only moments after turning the game on — real life forgotten, lost in a lovely new universe.

To follow me down that secretive passage, click the jump, my friends (fellow editor Jonathan Holmes and I have both lost ourselves there!)

I feel safe saying this even after only spending a few hours playing LostWinds — this is the most charming, enveloping Wii game I have played all year, period. I don’t need to hesitate, don’t need to play more to be sure. If you have a soft spot for whimsy and magic, download this RIGHT NOW. Do not pass Go, do not collect two hundred greenbacks, blah, blah, blah.

That being said, the game starts simplistic and stays that way, but rather than the detrimental kind of simplistic where there simply isn’t enough to do, it’s that feng shui kind of simplistic — think “less is more”. The action is 2D platformer-style, but instead of the usual jump and super jump, Toku (along with his ridiculously adorable hat) uses the power of wind to float from plateau to plateau throughout the world of Mistralis. He also uses it to affect elements around him, such as water, and I’ll bet it becomes more instrumental the further along you progress.

The atmosphere of this game nailed me — it has that dreamy loveliness that Okami fans will likely favor, and I, for one, am thrilled to see such pretty games popping up (and yes, it is still quite pretty, despite having GameCube-era graphics!). It feels casual, but not empty, which is a tough balance to strike…while all of us like games that feel a little hollow for the moments we crave brainless gaming, LostWinds is kind of the opposite: deliciously simple and totally engaging, yet easy to put down whenever you need to.

This is not a game for the average FPS or Devil May Cry fan, as there is nary a drop of blood to be seen, but if you love indie titles and a slightly artistic leaning in your gaming experiences, LostWinds is really going to impress you, not to mention make you feel pretty optimistic about this whole WiiWare thing.

LostWinds is the best $10 I’ve ever spent on a videogame. Though from a technological standpoint, the graphics are only GameCube-quality (which is still great for a downlaodable game), from a design standpoint, these are some of the best visuals any console has seen in years. This game is beautiful. If all you got for your money was the chance to look at the game, that alone would make LostWinds worth the price.

A big part of what makes the game look so great is the level of detail put into the game’s world and its synthesis of LostWinds‘ signature gameplay mechanic, the motion-controlled wind. You spend the entire game blowing everything in sight, not unlike Paris Hilton (that one’s for you, Workmeng). Like the time-slowing gameplay of Viewtiful Joe, or the celestial brush of techniques found in Okami, the wind-controlling gameplay of LostWinds feels completely organic, original, and exciting. If you have ever liked a 2D platformer, you must play this game. It’s just that simple.

If it was a little more fleshed out, LostWinds could have been a AAA “feature-length” retail game on either the DS or the Wii. Hopefully that still will happen. I know that if LostWinds 2 goes retail, I’ll be pre-ordering two. The first copy would be to play until the disk burns out. The second would be just for hanging out with, and once I get my courage up, I’ll try to make out with it.

I’ve got a huge man-crush on LostWinds. I want to have its babies.