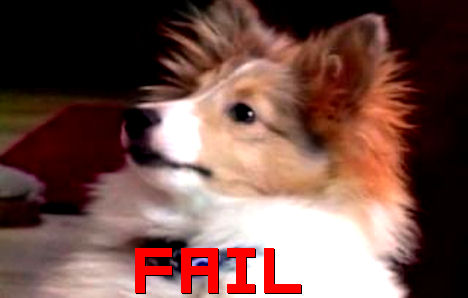 They say a dog is for life, not just for Christmas, but when Kathy White got a Wii for the Holidays, one dog’s life was pretty much over … at least temporarily. White, the owner of a five-month-old Sheltie puppy, was playing with her new Wii when she accidentally whacked her dog Ozzy in the temple with a Wiimote like a clumsy fool, killing him instantly.

“We had just got the Wii for Christmas,” explained Kathy, “so we were trying it out, and that’s when Alexis and I were bowling and Ozzy was standing by me and he jumped up and I hit him in the temple and killed him instantly.”

According to Kathy, Ozzy was not moving or even breathing. He was, for all intents and purposes, dead. She called her neighbor, Pene Honey, and started screaming that she killed her dog. Pene felt for a pulse, which apparently slowed and then stopped altogether. Ozzy’s nose was breathed into, but it was looking bleak. However, after around five more breaths, Ozzy suddenly coughed and woke up.

The dog was rushed to the vet where it was discovered he had severe brain swelling and underwent cardiac arrest. Luckily, he is now fully on his way to making a complete recovery, and is no longer allowed in the room when the family are playing their Wii.

The true tragedy of this tale, however, is that someone is called Pene Honey. That name just looks all kinds of wrong.