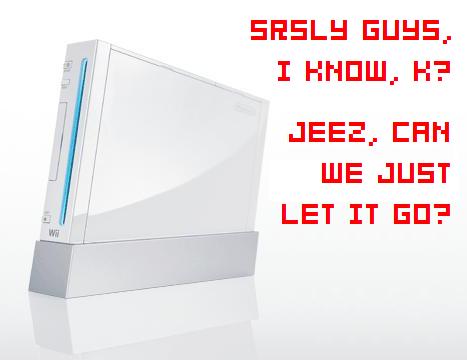 The handbags came out again this week for another round of attempts to write off the Wii. And once again, substandard horsepower was cited as a large part of the reason why the selling-like-crazy-all-over-the-world console was clearly a bad idea. Unsurprisingly, the quote comes from one of Nintendo’s rivals, Robbie Bach, president of Microsoft’s Entertainment and Devices division:

And the rest of the product is actually not a great product–no disrespect, but…the video graphics on it aren’t very strong; the box itself is kind of underpowered; it doesn’t play DVDs; there are a lot of down-line components [that] aren’t actually that interesting.

The challenge they have is that third parties aren’t going to make much money on this platform because Nintendo is going to make all that money, and their ability to compete with something like a Halo or produce an experience like Madden on their system is going to be tough. They don’t have the graphics horsepower that even Xbox 1 had.

Zzzz, Wha…? Sorry, I drifted off there for a second. It’s now around two years since Nintendo happily admitted their (now clearly successful) philosophy for the Wii and its hardware level, and attempts at point-scoring based on what we already knew seem ragingly anachronistic by this point.

But while those comments about DVD playback and not competing with Halo might sound like the words of a man who hasn’t heard anything Nintendo have said over the last twenty-four months, the Xbox 1 comparison is interesting given how that machine seems to have become the general point of comparison for the Wii amongst those who care about these things. And it was definitely interesting enough for N’gai Croal at Level Up to have a word with a few developer buddies and try to get the details on exactly what Nintendo’s machine can theoretically do.

Talking to technical experts at two third party publishers, Croal got an independent tech evaluation on the Wii, concentrating on how well its graphical prowess compares to the original Xbox, and touching on whether it can compete visually with the 360 and PS3. The answer? A resounding “Weeeeeeeeeell …”.

It seems that overall, while the Wii obviously isn’t going to be running Gran Turismo HD any time soon, some of its on-paper limitations aren’t quite as detrimental as Bach would think. The Wii’s GPU does indeed lack the programable vertex and pixel shaders of the Xbox, but extra memory means that in the much-quoted “Gamecube 1.5” description, that .5 does actually matter.

The Wii has an improved memory clock speed, 243 Mhtz as opposed to the Gamecube’s 162, helping the boost to 420p, and the machine’s enhanced memory size makes image effects such as anti-aliasing and motion blur much more comfortable to throw around. Add improved graphics chip performance and you’ve definitely got a machine improved over its predecessor, albeit not a graphics devouring beast of a thing.

One last unconfirmed but potentially eyebrow raising point is the possibility that the Wii has double the number of texture environment stages (TEVs) as the Gamecube. While documentation is conflicting in regards to confirmation, if this is true, the extra TEVs could mean the possibility of easier bump-mapping and environment-mapping on the Wii, albeit with some very creative programing required to avoid bottlenecks.

The article makes an interesting read, also covering how some developers are building tools to easily convert 360 and PS3 textures to the Wii, but really, I can’t help wondering when we’re all going to stop arguing over this.

To hammer a machine famously launched to compete on its own terms for doing just that seems increasingly like sticking your fingers in your ears and singing loudly given the Wii’s current success, and while Nintendo’s approach is divisive, it’s working whether you buy into what they’re selling or not. Admittedly, there’s been an argueable case of “could try harder” in regards to the polish of its third-party titles so far, and judging by the looks of Nintendo’s upcoming first-party software, the machine is capable of more.

But while I do hope that the next year or so brings us some improvements (I still find it boggling that people seem to so easily forget that the console’s only been out for six months), I really wish people would stop complaining about a lack of things that the Wii was never supposed to do, and just give it a chance to do what it was supposed to.