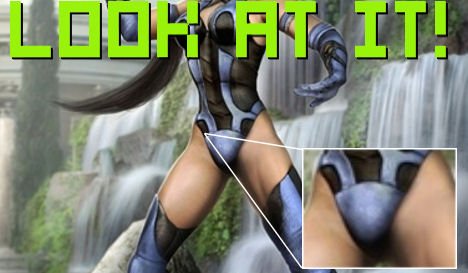 The latest render for upcoming license-’em-up Mortal Kombat vs. DC Universe reveals Kitana … and maybe reveals a little too much of Kitana, if women with huge bulbous protrusions from their crotch regions aren’t your cup of tea. My love of women with … shall we say … “groinal gifts” is known to all and sundry, but even I’m a little intimidated by Kitana’s considerable “bump mapping.”

Kitana’s bollock curtains seem to be a sign of a new trend. We already have to deal with a far more mannish Chun Li in Street Fighter IV, but if Kitana having a c*nt you can rest your beer on is any indication, one can only expect to see further instances of gynecockogy in the future. Who will be the next victim of penile panty lining? I shudder to think.

We can only hope it’s a lump of kryptonite that she’s stashed in her leotard in order to take down Superman, which might finally reveal the reason why the MK and DC characters are able to fight each other. I think a tasteful cutscene of Sub-Zero and Shao Khan forcing green rocks down their slacks (before kissing) would be an adequate way to ground this game in reality and make everybody happy, don’t you?