In the many months leading up to Noby Noby Boy‘s release on the PSN, I have held firm on one important fact — that the Boy of the game’s title is a dark and brooding hub of black, thirsting evil in the purest of forms. He is all of man’s malevolence, condensed and contained with a soulless vessel. Just look at him! It’s obvious!

Having played Noby Noby Boy for several days now, all my deepest, darkest fears have been made flesh. Boy is indeed the obsidian child, and I have the proof! For all those who believe in that which is good and Holy, please read on, and join me in my fight to stop this grotesque menace! 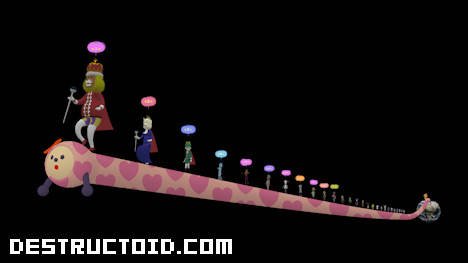 If you need a clear example of why Noby Noby Boy is Lucifer’s consort, then look no further than the entire point of his game. Noby Noby Boy is a black ritual in which everybody who owns the game works together for a common goal, pitching in their resources and surrendering all they have worked for in the name of the common good. Sound familiar?

The aim of Noby Noby Boy is to stretch the Boy out throughout the course of a play session and acquire an overall length. Before you quit the game, you then need to report your length so it can be added to the Girl, who will eventually reach The Moon. Everybody with a PSN account is expected to do this. Young or old, big or small. If that’s not something that would have given Lenin a hard-on, I don’t know what is.

It is my belief that Boy, as part of his agenda to destroy civilization and, of course, overthrow the Christian values of America, is spreading the filthy word of Communism to all good little boys and girls who are unfortunate enough to play this game. Boy’s natural color is also pink as well. Pink? Pinko? Pinko Commie Vodka Drinking Bastard? Oh yes, Boy practically flaunts it.

Also, just in case you didn’t notice, the point of stretching Girl is to get her to The Moon. Tell me, who had a space program and wanted to get to The Moon before America? That’s right! Russia’s goal of Lunar superiority never died, and it now works vicariously through the twisted machinations of Boy. The truth will out!

He Eats His Own Arse: 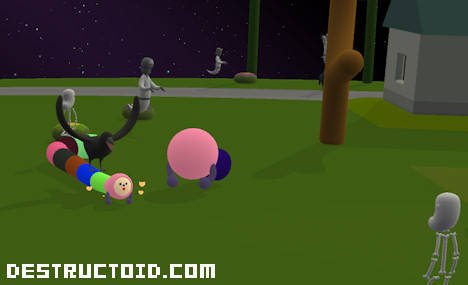 Boy is the ultimate symbol of decadence and perversion, a noir reflection of man’s own potential for debasement and sinful horrors. If you’ve played Noby Noby Boy for any length of time, you’ll know that Boy can split himself in half sometimes. As if being cut in twain and move both ends independently of one another wasn’t enough of an affront to all that is righteous, what happens next is sickening to behold.

If you want to join the two halves of Boy back together, all you need to do is have him EAT HIS ARSE. That’s right, Noby Noby Boy practices masturbatory cannibalistic analingus. Is there no end to this carnal carnival of gruesome gratification? No, there is no end. The only end in sight is the rear end that Boy is chowing down to satisfy his infernal lust. Somebody ban this sick filth!

He Cavorts With Devils: 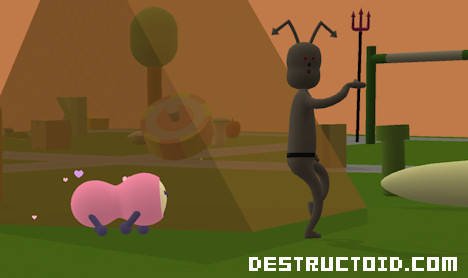 Have you ever danced with the Devil in the pale moonlight? Boy has, and he’s not ashamed to admit it. Noby Noby Boy is full of devils that seem to wear crude jockstraps and parade around with pitchforks, dancing like maniacs while their cold, dead faces betray not one slightest jot of emotion.

We captured the above photographic evidence, which was difficult to do since Noby possesses a sentience that sees him wander off on his own accord the second you try and take a screenshot — further proof of his evil. He definitely tried to stop the camera from taking any evidence of his demonic consultations, but we snapped this as he casually walked away. You can’t walk away from this Boy! The net is closing in — the GOODNESS net!

He Is Basically Eugene Victor Tooms From X-Files: 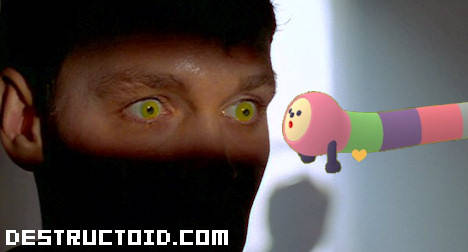 Eugene Victor Tooms is one of the most popular villains from The X-Files, an immortal cannibal who is capable of contorting and stretching his body in order to reach his prey. Sound like anybody you know? Yup, Boy has modeled himself on a hallmark of sci-fi evil, and pursues his sinister goals with reckless abandon.

Boy is able to eat innocent people for his own selfish ends, and does so without remorse. He too can stretch his body to fantastic proportions, sometimes just to accommodate more human flesh. Boy is Tooms. The truth is out there. 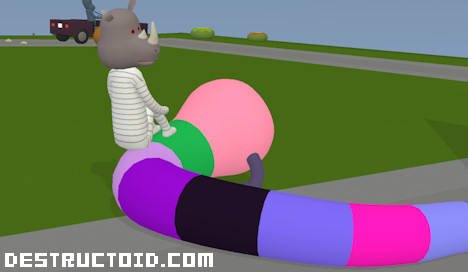 Noby’s list of crimes is long, but the prime example of just how low he’ll sink remains his unethical and cruel genetic experimentation. We recently unearthed this dank and grisly secret as Boy, casually indifferent to our presence, embarked on horrific human experiments so demented and sadistic that even Josef Mengele would feel queasy.

First of all, Boy did what Boy does best — he cannibalized a human being, swallowing him whole as a snake would swallow an egg. His murderous hunger not satisfied, Boy then swallowed an African Rhino! This in and of itself was disturbing, but when he then proceeded to defecate his two-course meal of murder, the mutated, malformed monstrosity that exited his rectal region was a sight to behold.

Yes, Boy had managed to splice together the genes of a person and a rhino to create the ravaged wreckage you see in the picture. His unholy son, the rhinocerhuman! Even worse, you can win a PS3 Trophy for doing this. The game actively rewards and encourages crimes against nature!

If that’s not proof that Noby Noby Boy is the product of the Great Beast, then I don’t know what is. I rest my case, even though some of these choices were … a bit of a stretch!

Okay, that was evil.