A column of flames plummets from an orbital ship. The scorching pillar smashes into the middle of a boisterous battlefield laced with rocket fire, magnetic rounds, sensor arrays, war walkers, and lumbering tanks. What fell wasn’t another weapon, although it is an instrument of destruction. It was a man, a suicide soldier from the 8th Armored Infantry. Southpeak Games has dubbed his method of combat entry as burn in. The friction from the 15,000-foot fall makes it easy to see why.

The Section 8 soldier’s armor is globular and form fitting, almost insect-like. Dark heavy plate covers every inch of the body, sinking in at the torso and expanding at the legs. The bottom of the helmet is curved into an angle, sticking out into the environment. White-hot lights are in the place where eyes should be. There’s another intelligence seemingly behind the helm.

All of Section 8’s soldiers are fitted with some sort of heavy armor. It’s a little boy’s dream come true. But I want to know why everything is covered in armor. I’m on a mission to find out why studios include the armor that they do — hulking, space-like, whatever — in their games. I asked four developers the same two questions about the armor in their game worlds. SouthPeak Games, like Epic Games, Bethesda, and Crytek, answered them. 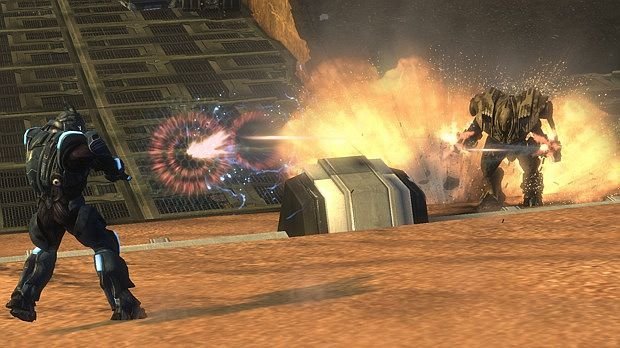 The armor in Section 8 is indicative of the action, but they aren’t as heavy-handed with their violent deliverance as the plate makes it seem. Game lead designer Robert Siwiak explains to me that the 8th Armor Soldier is an agile protagonist, designed to be able to traverse interplanetary terrain and kill a host of diverse enemies.

“The armor design reflects the endeavors that technology has afforded mankind, and the muscle it takes to protect it,” Siwiak says. “The characters in the 8th Armored Infantry are highly-trained soldiers who strike with a sledgehammer’s force, but execute their movements with a fencer’s grace.”

“The armor they wear is designed to enhance those actions in every way — it is sleek but solid; light but strong. The worlds explored in Section 8 use an advanced technology that has fostered human culture and exploration in ways previously unachievable. Man has greatly prospered and now spends its efforts on interplanetary colonization — nuclear war and nuclear wastelands don’t happen often in this universe, as it is such an obvious waste of resources better used for bigger (planetary) gains,” Siwiak says. 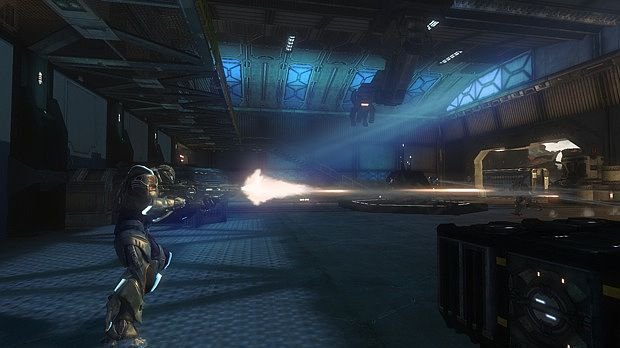 Cars were creatively drawn from and used as inspiration for the Section 8 soldier. Siwiak explains that the studio took what was best from East and West fusions and combined them with military functionality. Rough, tough, violent … and pretty.

“In exploring the Section 8 armor design, we explored designs that paired the sleek Eastern luxury car aesthetics with the aggressive hot-rod/muscle car designs from the West, and combined that with military intent and purpose —  the elite powered armor worn by the 8th Regiment is the result. The suit is sleekly designed for atmospheric burn-in and crafted to enhance all of the actions made by the user. One of the main features of the suit is its ability to withstand the burn-in process.  The 8th Armored drops into battle from 15,000 feet, so insuring that the soldiers inside would be ready for combat the moment after impact was a core design consideration.”

“Combine that functionality with the ultimate directive of creating this armor into a devastating war machine, and the 8th Armored Infantry strike terror into foes at the mere mention of the name. It’s a standard issue with a jet pack and totally customizable to fit any situation faced by the infantry on the ground, the armor worn in Section 8 is the ultimate military mobile-weapons platform. Before burning-in, and even on the ground, soldiers can change their loadouts since each suit has multiple weapons slots for the main and secondary arsenal and passive modules as well. This allows soldiers to mix and match disciplines, like adding stealth, boosters, shields, etc. to design their power armored suits to how they want to go into battle.”

Tomorrow, we’ll do a recap and reveal a few concept images.