I love my ax

I picked up Dog’s Life on recommendation from a friend. They told me, “This sounds like the sort of game you’d cover in your column.” I didn’t think much of it, then realized, “Wait, which column?” I have one that covers bad games, and one that covers obscure good games. I didn’t ask, because I prefer pretending to be omnipotent.

But then, I’m picking the game up at the pawnshop and the clerk tells me, “Dog’s Life is way more fun than it has any right to be.” What does that mean? He didn’t say anything about Crush Hour, which I was picking up at the same time. That would have tipped me off that he was just lying to enable my purchase. So was this a buried gem or a buried squirrel carcass? It’s actually a bit of both. 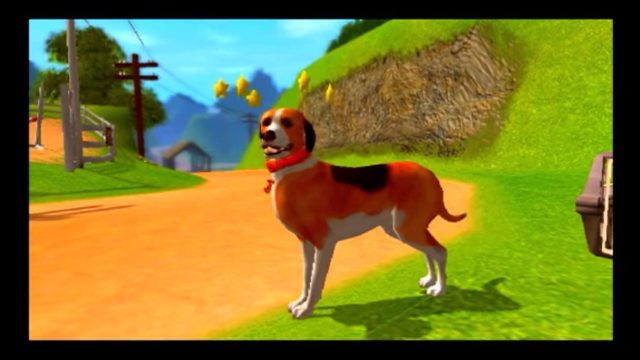 Let me show you Dog’s Life’s papers, because, wow. It was created by Frontier Developments and directed and designed by David Braben. David Braben, the guy who co-created Elite. You have no idea how much time I poured into Frontier: Elite II and Frontier: First Encounters as a teen. Not that the guy’s track record is squeaky clean, but you get a special kind of respect for inventing the first space trucking game.

Weirdly, Dog’s Life shares similar philosophies as Elite. Firstly, it obviously started with the question, “I wonder if we can make a game based around blank.” Second, it’s crammed full of interesting tech. Okay, maybe they didn’t create a finite but massive universe to cruise around in, but they did get the dog to move without stiff animations. 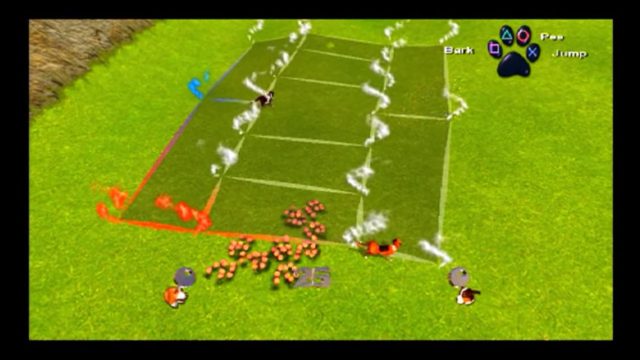 Can you guess what the story here is in Dog’s Life? Yeah, it’s about evil dog catchers abducting the main mutt, Jake’s, true love, Daisy. I’m trying to think of a dog story that doesn’t involve that. Here we go: Homeward Bound. The Fox and the Hound. I’m pretty sure The Shaggy Dog had dog catchers in it, but I really wish my mind had let that stay buried. I’m very upset right now.

Jake has to follow the trail of these dog catchers in order to save his lost love. Only not really. With you in control of Jake, you mostly meander about, sniffing up stinks and collecting bones. Sometimes you get bones for collecting stinks, and that’s pretty cool. I bet my dog wishes I’d give him treats for sniffing the same spot for, like, an hour.

These bones allow you to strengthen your powers of pissing. Also, digging. The number of bones you have dictates how you compare to other dogs, and gaining more of them not only gives you an advantage in literal pissing matches but also allows you to proceed through the game’s areas. How many bones are in a human body? What? I’m not implying anything, but now that you mention it, you’re almost always one murder away from completion. It’s just, you know, an observation. 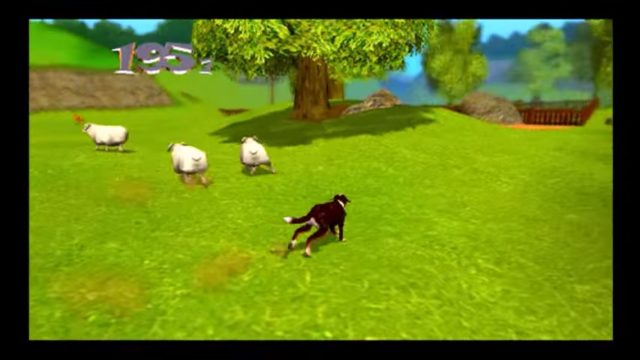 You gain bones by completing various tasks in each environment. Typically, one bone is merely buried. One or two might just be lying around. But many of them require you to herd sheep or collect batteries. Others put you in competition with another dog, and defeating them allows you to control them through a power I didn’t know dogs have: possession. Often, there’s a goal that requires this other four-legged friend, but you can accomplish many of the stages’ objectives if there’s a breed that catches your eye.

It’s really early-aughts in its design. It’s like a Tony Hawk’s Pro Skater game, but instead of doing some sick tricks to unleash chaos, you’re helping somebody find their ax by tracking their scent. Then they stand there, overjoyed that their ax has returned to them, repeating the same voice lines over and over. The most creative it gets is with its smell-o-vision, which puts you in the dog’s perspective and allows you visibly see color-coded scents on the ground. Amusingly, it desaturates the colors of the environment, as well, to sort of mimic a dog’s color-blindness. The back of the box touts up to 40 hours of gameplay, which is hilarious to me. It reminds me of when Ogre Battle 64 put the estimate of 50 hours on the back of the box, but it took me around 90 to complete it. Dog’s Life is the other way around. It’s much shorter than it brags about. I’m pretty sure I clocked in at eight hours, and I spent a lot of time gathering bones to upgrade my bone power. What are the remaining 32 hours supposed to consist of, box? Are you hoping that I both really suck and am really patient? A poor assumption on both fronts.

What’s there is a pretty shallow and uninventive collect-a-thon. Over-boning and easily dominating the other dogs is really not difficult. Some levels feel like they aren’t even trying, just leaving bones around for you to add to your collection. There’s this feeling like it needed a longer polishing phase to balance the game better. 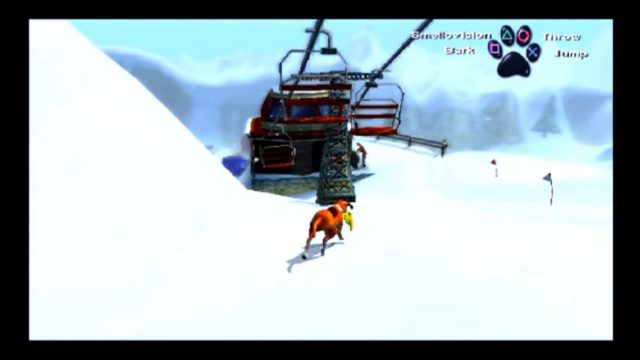 Dog’s Life is a pretty long way from the worst kusoge I’ve experienced. I’m going to disagree with pawnshop guy and say that it is exactly as fun as it deserves to be, and that’s about as much fun as you’d find in a clearance bin. You know, not entirely a waste of time, but maybe an unfulfilling use of a weekend. It also doesn’t feel like a soulless product, though perhaps one that was completed out of obligation rather than because the team was passionate about bringing it to the world.

I’d be amiss if I didn’t mention that Dog’s Life holds a record for most voice-overs recorded by one person. Apparently, Kerry Shale put the words in the mouths of 32 characters. I mean, this results in a lot of them having goofy, cliched voices, but still, pretty impressive.