Right, so let’s get the confusion over quickly: I’m not DMV, I’m his mid-season replacement. But just like any proper stepfather, I’ll only be around long enough to shatter your self-esteem and devalue your home with discarded, oily car parts left in the front yard. I might even destroy your sexuality with some ill-timed pats on the ass. Anyway, ol’ DMV will be back next week. But for now: Capcom? A word, please.

It pains me to say this, and I’m sure you won’t be happy with my decision, but there’s simply nothing I can do to make it easier. Super Street Fighter II HD Remix? Yeah, that’ll be the last Street Fighter II revision you ever do. Hm? Yes, that’s right. Ever. Fo’ever ever. Sorry, but– no, I know, Capcom. But I ran it by the guys up top, and they said that HD Remix would be the last. Sucks, I know, but that’s how these things go.

Dry those eyes, gentle Capcom; it’s a sad day for all of us. Why? Well, y’see, it’s like this — there are so many platforms out there now, two major handheld players and three major consoles and digital distribution platforms for just about all of them, and those other developers are taking advantage. They seem to think that just because we’ve got ninety different ways to play a game, they can release or remake a game ninety different times with ninety different varieties of flaws. It’s the insatiable appetite for nostalgia that’s driving the market to ruin, Capcom. You did the best you could with your awesome Mega Man PSP ports, but the saturation’s reached a critical point. It’s time to shut it down.

Don’t despair, pal. It’s entirely possible to turn a negative into a positive. Look, we’ll compromise. For the upcoming release of HD Remix, all you have to do is include everything great from every prior edition of Street Fighter II, toss in them HD graphics you’re so jazzed over, and call it done for… oh, five or six years. Yeah, that’s a long time, especially nowadays. But you’ll make your customers a lot happier with the products you turn out. 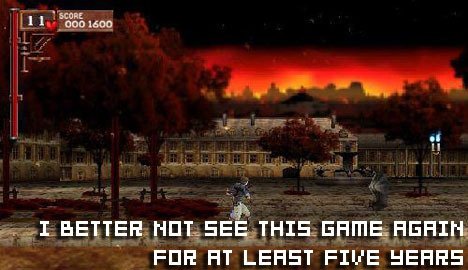 Somewhere during my time at Destructoid, I got pinned as the “retro guy”. That’s a badge I’ll wear, because it’s more or less correct — I like retro gaming, if only because a lot of the sensibilities that make classic gaming what it is have been largely abandoned by recent generations of gaming platforms in favor of 3D environments and first-person shooting. There’s nothing at all wrong with games that incorporate these forms of play; there’s a time and place for everything. But 2D platforming, shooters and other genres that were once steadfast capstones of the gaming industry are a little scarce nowadays.

Given this urge, it seems likely that I’m the sort of guy typically targeted by a remake or update of a classic game, the sort that we’re seeing in waves as of late. This is absolutely true. I’m a massive whore for this stuff, so much so that when they find my mangled corpse in a back alley in the worst part of Seattle, traces of Mega Man: Powered Up will be found in the filthier parts of me. I like the idea of having my favorite games brought to newer platforms that I play regularly. What makes me wonder — and worry — just how valid public claims of companies making fast-grabs for cash with these remakes is their hit-and-miss quality.

I know, I know — that’s the point, and you can’t shit on companies for simply wanting to turn a profit on their intellectual properties. Still, these developers would win a lot of fans (and sell a lot more units) by simply getting it right the first time.

You can’t talk up a topic like this without mentioning the industry’s most lauded repeat offender, Square-Enix. Their legendary first foray into the Final Fantasy series has been ported and remade a staggering seven times in the twenty years following its release, and the latest, Final Fantasy: Anniversary Edition on the PSP, isn’t receiving as warm a reception as Square-Enix would probably like. Everything in Anniversary Edition — even down to the bestiary order, Jeremy Parish reported in a preview — is lifted from the 2003 GBA incarnation, Dawn of Souls. Shelling out $29.99 for Final Fantasy I and II (individually, mind) will net you a bonus dungeon, a new orchestrated soundtrack, and sickly-cute graphics straight out of Ragnarok Online.

Is $60 for two PSP revisions worth what $20 will get you on the GBA? For some, maybe. But after twenty years of refinement, Square-Enix is still reaching for a perfect version of Final Fantasy. Will they ever get it? Fuck, why would they want to? That’d ruin a perfectly good reason to do it again in another 3 to 4 years!

I don’t mean to imply that all those remakes that we’ve seen over the years have been terrible. I’m sure Final Fantasy: Anniversary Edition will be a hoot, but it’s not quite as good as it could and certainly ought to be. You may have noticed that vaguely-phrased definition of perfection in this article’s title, “definitive version”. Let me ‘splain that.

In regards to remakes or ports, a “definitive version” is the game in the best shape it could be on existing hardware. Problems that plagued the original rendition of a title ought to be fixed, audio and visual standards raised, and new content added. In a remake, the preservation of the look and feel of the original product ought to be maintained as much as possible; enhancement should bring out the best in a game.

Capcom’s insanely excellent Mega Man: Powered Up is a great example of what I look for in a remake. Developers took the brand of gaming innocence that is now personified by the classic Mega Man series and jacked it to eleven, added two new bosses, 100 challenge stages, some incredible visuals and very well-translated level design, a fucking level editor, and the big kicker: the opportunity to play through the entire game with sixteen different playable characters. That’s a whole lot of new, which is what you’d expect from sixteen years without an update. The less you return to the well, the more awesome that well will be once you finally go back.

Konami seems to be on the ball too, having finally decided to remake the incomparable Dracula X: Rondo of Blood, a game that actually deserves to be remade. It’s not only one of the best Castlevania titles ever made, but Rondo never saw a US release, having been originally developed for the PC Engine CD — not exactly a high-profile import in the states. On top of completely revised visuals rendered entirely in 3D, a new soundtrack and other additions, Konami’s including the original PC Engine version and, because they love us, Symphony of the Night in its entirety.

These games, and a handful of others, are fine candidates for the fabled definitive version. Capcom, having created Mega Man: Powered Up, can rest easy knowing that they’ve created the absolute best version of the original Mega Man they could have, and can lay the title to rest for awhile. Similarly, if Dracula X Chronicles brings it together well, we’ll have an excellent version of Rondo to sink our teeth into for years to come.

It’s like buying a really great blender. It blends like a son of a bitch, does what it’s supposed to do very well, and will never need replacing until there’s some sort of massive revolution in blending technology. Or something like that.

Now back to you, Capcom.

HD Remix sounds like a swell idea. It’s high time that Street Fighter II got an upgrade that goes beyond laggy, underwhelming online play or multiple costumes and playable boss characters. It’s a great idea to jack up the graphics towards today’s standards, but– come on, you know there’s room to grow yet.

It’s not like this is another straight arcade port for XBLA, as last year’s Hyper Fighting was. If you’re already putting so much work into HD Remix, you might as well go the extra mile and combine this brave new direction for SFII with the series’ best effort to date and make a definitive version. If the gameplay remains pixel-perfect, of the graphics are really all that they’re cracked up to be, and if you can maintain the level of excellence established by Anniversary Edition, you’ll have created the only version of Street Fighter II gamers will ever need.

If you want to update it again, do so in small doses using the magic of downloadable content. But how about a bit of a rest before your next big release, eh? I’m not asking as just some random whiny gamer, I’m asking as a bloke who already owns six different versions of Street Fighter II and wants the One Version To Rule Them All.

My reasoning behind begging for a definitive version is, for the most part, tied into a plea for my empty wallet and growing pile of debt, but it goes farther than that. Games that get remade most often are because they’re of immense importance to our history; they’re cornerstones of genres, they kick-started the most popular series we’ve ever seen, and in the case of Final Fantasy, they’ve saved companies from financial ruin and helped to launch massive development empires.  Give these games and the consumers who love them the respect they deserve. Get it right the first time so we won’t need a next time — at least not for awhile.