Apparently it’s Memorial Day weekend in the U.S. or something. A good time to play some Company of Heroes: Opposing Fronts and to watch Taegukgi hwinalrimyeo because it’s better than Saving Private Ryan.

But you want the mobile gamess right? This weekend there is an actual not-crap Android game, a couple of interesting iOS games, another EA iOS sale, and a bunch of free games.

Most of my time has been devoted to trying to finish Epic War TD in the past weeks while watching the Phantasm and Hellraiser series. The game can be brutally hard at times, and it also drains my battery in two hours. It’s no longer free, but there is a free ad-supported version you can check out if you missed it earlier.

Bumpy Road is not just cute, or charming. It’s a mix of cute and charming, and at the same time transcends both. It has simple controls that can take a while to master, using a single touch to shape the ground and platforms’ angle in order to move a car around. Tap under the car, and it makes it jump.

The game has two modes, Evergreen Ride and Sunday Trip. While Sunday Trip is more of an extra, in which you try to collect as many points and speed boosts to reach a finishline in as little time as possible, Evergreen Ride is where the bulk of your playtime will be.

In Evergreen Ride, you collect “gizmos” as a form of fuel. Run out, and it’s game over. Max the gizmo meter, and you are transported to a bonus level for about 20 seconds to score some extra points. Dying because you run out of gizmos is going to be the last of your concerns though, as gaps in the ground mean instant death. And the further you go, the easier it is to die when you miss a switch to create a platform, or simply didn’t have enough momentum to jump the gap.

It can also be a bit easy to jump when you are actually trying to raise the terrain behind the car in order to reach momentum. I had a death-by-gap in all but one of the instances I played it, and in almost all cases I simply mis-timed jumped by accident or didn’t see a gap coming. Suffice to say I’m terrible at the game, but it’s still quite charming and oozes a relaxing atmosphere while you play it. You do get better at it as you play more and more, which is great for replayability.

There is even a story in the form of the car-driving couple’s lifetime of memories, as told through collectable snapshots that form a comic strip. For $2.99, it might not be an instant-buy kind of game for all people, but it’s still worth keeping an eye on if it drops in price. If you own an iPad, the controls are perhaps a bit easier and it makes it more affordable as well. And if you are not a cheap-ass, you do get a great and hard-to-master game with some amazing art and music that will last you a long time. Highly recommended.

At face value, To-Fu might look like just another platform/puzzler. But it’s quite good! The gameplay is as simple as it gets: drag To-Fu in a direction and let him go to shoot him away. The levels quickly becomes pretty hard though, as spikes, lasers, and buzz saws mean instant death to the ninja piece of vegetarian food.

Add in glass surfaces that make you slide down, moving platforms, and surfaces and teleports that bounce you off or shoot you away at the angle you approach them, and you get an idea of what kind of game this is.

In fact, there are a large amount of levels that will take you quite some time to get through. As an added bonus, you can choose to finish a level by just bouncing To-Fu around until you reach the exit, but you get medals for staying under a set amount of shots, and for grabbing all dots that sprawl a level.

Because it’s near impossible to grab both all the dots and stay under par with the amount of shots, it means you’ll be replaying levels a lot when trying to “complete” the game. If you are the type that retries an Angry Birds level over and over until you get three stars, you’ll probably get a kick out of To-Fu. And for the $0.99 iPhone price, it’s a great game to play in short bursts or longer sessions.

I didn’t get to try this one out myself, but it looks fun enough. You trash eight of the world’s cities by running through things, destroying them, and collecting thingies in the air. It looks like mindless fun, and also like something you might finish once and don’t go back to unless there are very competitive leaderboards that haven’t been hacked yet.

This is a bit of a simple game really, and it doesn’t look like the best-looking iOS game out there (although it’s a Unity-powered game). But Bruce has music that sounds like it came right out of Kingdom of Keflings, so there’s that. You’re a turtle that falls down and tries to collect stuff withing a set amount of time, using some platforms to gain speed and other (rounded) platforms to move in other directions.

I had a lot of fun with it while it lasted, especially because of the soothing music. But it’s probably more fun for kids or a casual audience than most of you, as it’s easy to shut down the game after a couple of tries and then not feel like starting it up again. It’s still not a bad game, just not something I’d recommend if you only have $1 to spend and a million games to choose from. If you ever see it for free though, it’s enjoyable enough.

If there’s one thing I couldn’t care less about, it’s match-3 games and slide puzzlers. So when I saw this game pop up that seemed to include both, my first thought was “really?” But as it’s from a Swedish developer and I have a soft spot for the Euros, I decided to check it out anyway.

Lo and behold, it’s actually a great little game! It’s a bit hard to gauge from the video, but the puzzles are what make it good. The goal is to match three star-blocks in a row or column to clear a level. It starts easy enough, simply sliding some blocks around and restarting a couple of times because you were being a dumbass.

However, you quickly get to brain-crunching puzzles with teleport hats, bombs, and other elements that make you think hard and plan ahead before you “get” it. Another aspect that make it interesting is that two similar blocks can stick together and slide as a two-block item. This sometimes obstructs a path you needed to take, and sometimes it’s key to moving blocks around without letting them drop in a pit you’ll never get them out of.

The puzzle design is great, especially compared to what’s out there on the market, so if you are a fan of this type of game it’s a no-brainer to give it a go.

Icarus-X has made the jump to Android, and is being hailed as one of the best shmups on the platform. I don’t really know what else to add about this one, it’s a shmup on a phone and it has bullet hell. What more do you want?

The trailer for geoDefense is awful, but thankfully Touch Arcade has a great video that show you exactly what it is. geoDefense mixes traditional tower defense with Geometry Wars style graphics, which is great. It’s also free for a limited time, and one of the best tower defense games I’ve played on iOS, so go grab it. Now!

From the makers of Canabalt, Gravity Hook HD is interesting enough. I suck at it and initially dismissed it, but it’s not a bad game. You grab orbs iwth your hook to propel yourself ever upwards, with mines and other obstacles hindering your journey and often leading to frustrating deaths.

I’m going to stick with Mechanic Panic myself, but it’s a free game and some of you might like it. You can also play the Flash version on the game’s website. See the above video for someone who is infinitely better at it than I am. 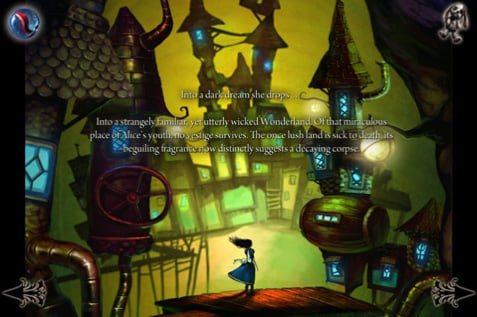 This “game” runs like crap on my iPod Touch 4G (2-3 fps in-game) and is missing part of the screen, so I have no idea if it’s actually any good. It is, however, an interactive storybook that bridges the story between American McGee’s Alice and Alice: Madness Returns. Written and illustrated by the Spicy Horse folks that made both of the Alice games, it apparently it also includes a $10 discount voucher for Madness Returns on the EA Store.

Found this on Touch Arcade (pretty much the best mobile gaming dedicated website out there). EA has lots of games on sale, just like the Easter deals they had before. That one put a lot of EA titles in the Top 10 paid apps, so it makes sense they’d do this again. No Dead Space for $0.99 this time around, but it has some other titles like R-Type and Mass Effect Galaxy for a buck. Also, no Android deals for some reason.

I hear the Sims games are terrible on iOS, so you might want to steer away from those. Some of these game deals might also be U.S. only, but if you look them up manually the price is probably the same in most cases.