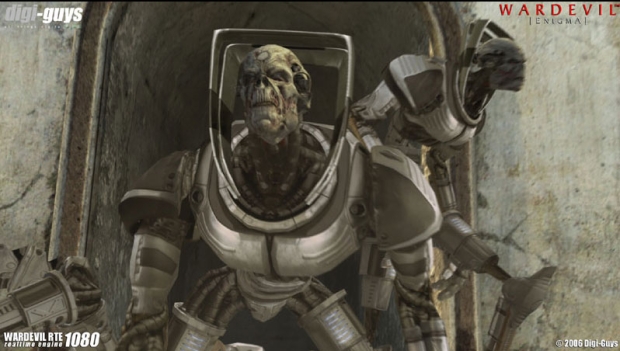 OK, step one of this post will be to remind you what WarDevil, a previously thought to be PS3 exclusive third person action game, is by linking to the only other post Destructoid has ever done about it waaaay back in 2006. In said post, which I am linking to here (thus completing step one), Nick “Fearless Leader” Chester correctly predicts that this game is most likely a piece of vaporware that we’re never going to see. However, like all good vaporware that no one actually cares about, it won’t stay dead.

Now for step 2, in which I inform you of the outrageous claims the devs are making about the game they claim still exits. The line on this one is that it’s going to deliver Hollywood-grade visuals at 1080p and 60 frames per second with absolutely no compromises. Supposedly a group of journalists got to see the game behind closed doors at the Tokyo Game Show and came away impressed with the Digi-Guy (who?) developed game as Edge Magazine informs us this month.

“WarDevil’s stake in the ground is its commitment to deliver ‘Hollywood-grade’ visuals: 1080p at 60 frames a second, with no compromise on the fidelity of its high-resolution textures and a suite of filtering effects. Remarkably, it looks as if it might just achieve it – with a version of the software having already been running smoothly on an original Xbox since 2006. It’s now leading on PS3 and being shown in closed-door sessions at TGS, the demo we saw seeming to prove that though the game itself is currently out of focus, the tech behind it already appears to be sharply defined,” the magazine claimed. (Showing you the quote is step 3, by the way)