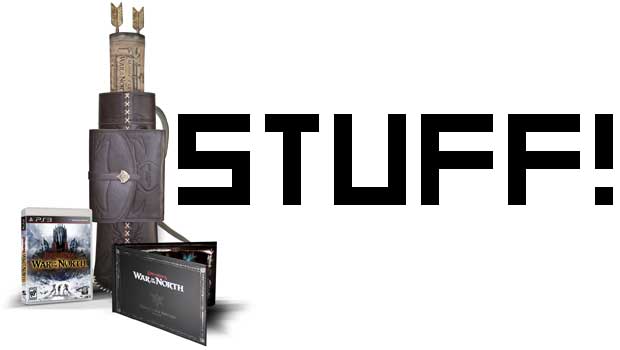 First of all, Snowblind Studios’ Lord of the Rings: War in the North finally has a new release window. After a few delays, the game is getting ready to ship for a fall release. Great!

With a release window set, publisher Warner Bros. Interactive Entertainment has announced a Collector’s Edition which comes with: a Ranger of the North quiver case; an art book; an “inside” look at the game’s music, including three songs from the War in the North soundtrack; and a Ranger of the North Avatar for Xbox 360 owners or an XMB theme pack for PlayStation owners. All that, plus the game, for $129.99.

Also announced were pre-order incentives, unique to one of six retailers. I know you love those. Details below.

Amazon.com
Exclusive to Amazon.com, pre-order the game and get early access to part two of the War in the North Digital Comic written by Brian Wood, illustrated by Simon Coleby and produced by DC Entertainment. The comic book reveals the back story leading up to The Lord of the Rings: War in the North. Players will also receive the Orc Champion sword for in-game use.

Best Buy
Embark on an Elven adventure with the Elf Theme Pack, equipped with a mystical Elven sword, armor and helmet, and get access to the Lothlórien Challenge map.

GameStop
Visit the Citadel of the Stars and the Tower of Stone with the Human Theme Pack equipped with an exclusive human sword, armor and battle attire of the Human Ranger, and get access to the Osgiliath Challenge map.

Target
Immerse yourself in the sounds of Middle-earth with three exclusive tracks from the War in the North soundtrack.

Wal-Mart
A Dwarven quest lies ahead for everyone who chooses to pre-order at Wal-Mart; the Dwarf Theme Pack includes an exclusive dwarf sword, armor and helmet.

Filed under... #Lord of the Rings