The development team that brought you ICO and Shadow of the Colossus has posted a “Now Hiring” ad in the latest issue of Famitsu.

People do crazy things for love, and you know you love these games. So, thanks to Nick’s alertness, if you happen to be a masterful video game programmer, fluent in Japanese, and willing to uproot your whole life to join this team for its third installment, then here’s your chance.

Not that they’ve been very forthcoming with information as to how to reply. Such are the mysteries of women…and Sony.

[Update: Further information on the love connection between you and Team ICO can be found on Sony’s career website here.]

(Hit the jump for the scan) 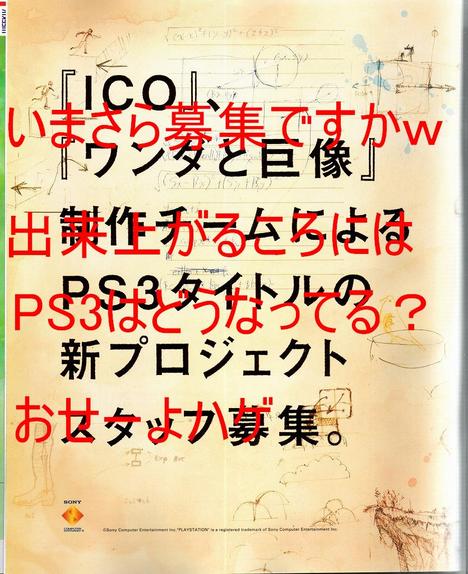 The underlying black text translates to:

Now hiring for a new PS3 title from the production team that created Shadow of the Colossus.

The red text overlay is a Japanese commenter’s query:

By the time it’s finished, what will have become of the PS3?

What, indeed. I figure, if the PS3 is a little downtrodden, this title might inject some much needed life back into it…a colossal-type injection.