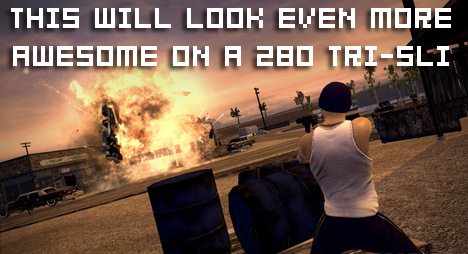 Over at the Saints Row Community Forums, one of the community managers released some details about what kind of computer you’ll need to run Saints Row 2 and what Volition’s plans are for distribution and DRM.

It turns out that Volition is one of the companies that’s realized that draconian DRM isn’t a piracy solution, and they’ve decided to use Steam to validate copies of the game. According to the community rep., if you purchase a retail copy of the game you will need to do a 1-time validation over Steam – once you’ve done that, you can play the game whenever you want, online or offline. It’s still DRM, but it seems pretty reasonable to me.

Volition also let slip some bad news for Microsoft – they’re going to be foregoing Games for Windows Live in favor of Gamespy. Microsoft has been trying to push the service hard (likely so they can turn it into microtransaction heaven), but so far most companies don’t seem to be interested.

Finally, hit the jump for the minimum and recommended specs. Is anyone excited for SR2 on PC, or has everyone already played in on console?