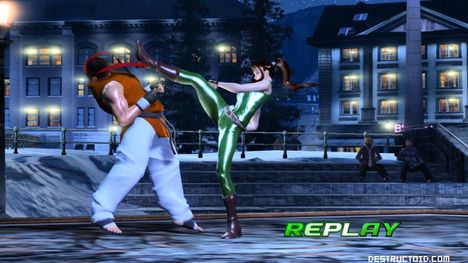 If a recent Games Rader hands-on preview of the Xbox 360 version of Virtua Fighter 5 is to be believed, the game is looking better than it ever has. Writer Christian Nutt (har har) raved about his time with the game, saying it looked as good, if not better, than the already released PlayStation 3 game.

Today, Sega released a few new screens of the game and well, it looks … not that bad. It doesn’t look that great either, so what’s up?

This could be a case of poor screen grabs, or maybe these are screens taken from an early build of the game. I’m willing to withhold early judgement, but the PlayStation 3 version Virtua Fighter 5 was an early showcase of the graphical power of Sony’s system; I guess I expected to be more impressed.

So what do you guys think? Looking better or worse? And based on what you know about the game (and what you’re seeing here), are there any Xbox 360 owners who are busting open their piggy bank to pre-order Virtua Fighter 5?