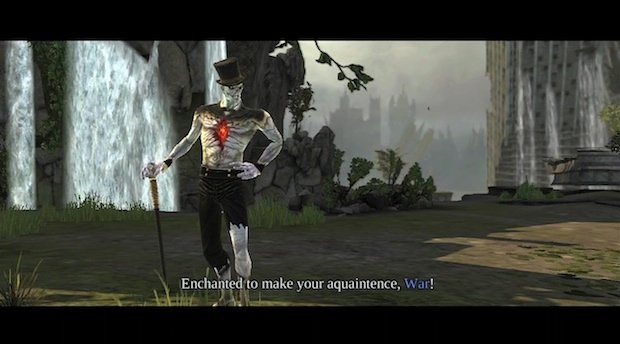 Skulls, sinew, and pieces of bone are commonplace in Darksiders, a game made for those into both Zelda and Hot Topic. But did you know that a top hat, a monocle, and a cane make appearances as well?

Meet Wicked K, a skeletal ruffian who hides in several sections of the world map.

“Enchanted to make your acquaintance, War!” Wicked K exclaims with a tip of his top hat and a small gentleman’s bow the first time War meets him. He then straightens his ghoulish back and readies his cane for intense battle.

And the day is almost always his if the user hasn’t mastered counter-attacks — Wicked K moves like snot on a vertical pole and his razor sharp wit distracts. “Gentleman’s rules,” K tells War, “no low attacks or foul language.”

Wicked K is a an inspired character, one that has stayed in Vigil Games collective heads for a couple of years before being dropped in the game at the last second.

“He’s one those characters where we talked about putting him in the game,” David Adams, Vigil’s general manager told me over the phone this afternoon.

“We didn’t put him into the game until the last month when we all sat in the room at 3 o’clock in the morning and were like, ‘Man, we gotta get this guy in the game. We’ve been talking about him for two years,’ “

But he’s more than just a character: he’s the digital recreation of a Vigil inside joke.

“Our lead designer, Hayden Dalton, he’s from Manchester and our art director is from London. We have a pretty big ‘Brit’ contingent, so it was kind of like our caricature of all those guys combined together in one ridiculous caricature.”

Don’t count Wicked K as a senseless enemy despite his ridiculous appearance — he’s a worthy enemy who has a ton of soul clinking in his pockets. Find him and size him up for yourself.