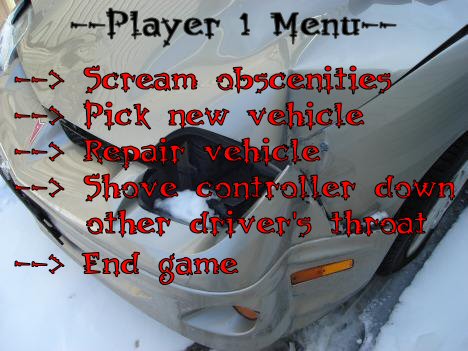 Apparently my car accident Friday night could have been caused by something other than the other car driver being drunk or severely lacking the brain cells to drive a vehicle on the right side of the road.

A study by German researchers released yesterday in the Journal of Experimental Psychology: Applied showed that people that play video games may be more likely to engage in risky driving practices and get into more car accidents than non-gamers.

“Driving actions in these games often include competitive and reckless driving, speeding and crashing into other cars or pedestrians, or performing risky stunts with the vehicle. In short, most actions in racing games imply a very high risk of having an accident or severe crash in a highly realistic virtual road traffic environment,” the researchers wrote.

Researchers also did tests on people playing shooting games and found their aggression levels were elevated after play. The research group believes that not only violent games cause harmful behavior in players, but any game where the rules of normal day to day life do not apply can be a bad influence. Parents are strongly suggest to discuss these games and the rules of the road with their children.

So the other driver could have been possibly driving down the middle of the road at 2:30 in the morning during a bad snow storm because too many video games have made he believe that life has a restart button. Great, now maybe I should show him that if I take him down with a head shot, he doesn’t actually disappear and I don’t really get any points for it. Though I wish I could.

Filed under... #Controversy #Science#Things gamers do