Coming this year to PC, Xbox One, and Switch

I realize that Steam Next Fest is wrapping up tomorrow, but I’ve got another demo recommendation — a last-minute, gotta-play-it pick. It’s an action-RPG called Unsighted, and it confidently blends a lot of fun concepts we know and love into a cool android world.

I hadn’t seen the E3 2021 trailer until today, after I had wrapped up the half-hour-or-so demo, and now I’m even more stoked about Unsighted. The scope looks great.

Straight away, the demo — which seems to be the game’s opening — sells a sense of sci-fi intrigue with a mysterious world of automatons who gained consciousness with a precious, now-dwindling resource. Brandishing a sword (and eventually a blaster), you’ll explore a ruined city with light navigational puzzles and plenty of killer bots sprinkled in.

I’m already excited to see where the story is going just based on the early worldbuilding, a couple of short cutscenes (including a slick “elevator ride” close-up cinematic that calls to mind Metroid Prime), and some memorable character designs. You even get a dog sidekick!

Even if I wasn’t vibing with the narrative so far, I’d still be drawn in by Unsighted‘s action-exploration gameplay — it’s surprisingly fluid and crunchy. I’m pretty impressed.

As you can see in this clip, Unsighted is all about balancing your stamina usage with every melee attack and dodge roll, keeping combos going to maximize your damage output, nailing those perfect parries to stun foes, and really just keeping your cool under pressure.

Control-wise, it’s nothing too taxing, though things admittedly get trickier once secondary ranged weapons are introduced that have varying ammo counts and need to be reloaded in the heat of battle. (There’s an “active reload” bonus to optionally keep track of, too.)

I had the best results with a gamepad over mouse and keyboard controls, and by the end of the demo, I was glad I went with the “recommended” middle-ground difficulty, Action Girl. It felt spot-on. I had enough breathing room to nail down the flow of combat without needing to constantly pop my one-time-use-but-refillable healing syringe. 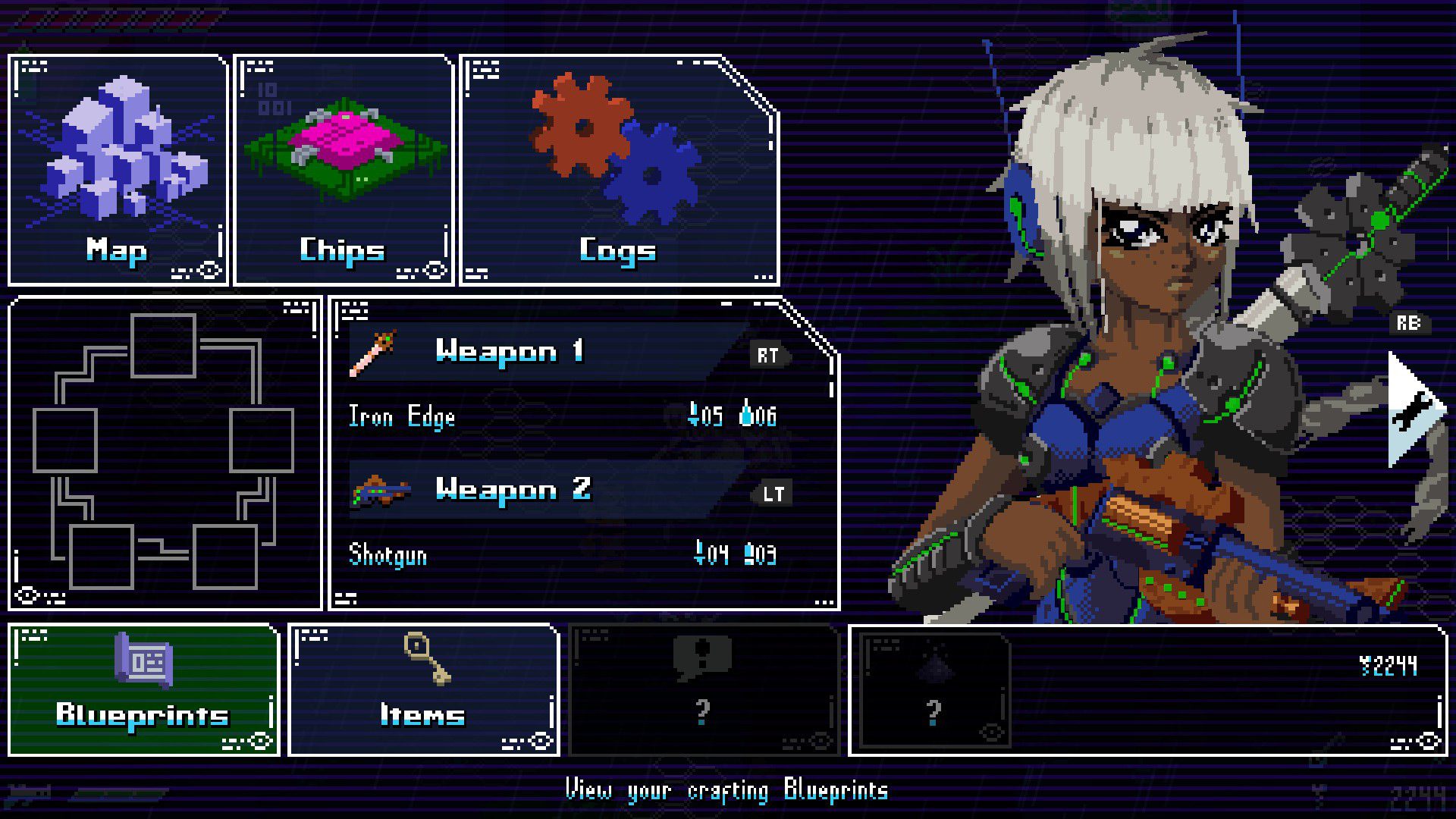 Some of the elements, like blueprints and crafting, weren’t featured in the demo. But I did smash open a lot of boxes for scraps and feed my fightin’ doggo some apples.

Outside of combat, it’s a matter of pulling up your metroidvania-style map, making mental notes, and looping around to check for required items (like keys) and secrets (like equippable Chips to bolster your preferred playstyle). So far, the puzzles were short enough to keep the pacing up without being so easy that I’d sleepwalk through them.

From the look of the trailer, there will be even more interesting traversal upgrades to unlock, and the gear customization should open up to keep everything fresh further in.

One other thing I really appreciated is that the demo lets you jump into a later-game boss fight that, without practice and insight, will destroy you. It got me, at least. It got me good. 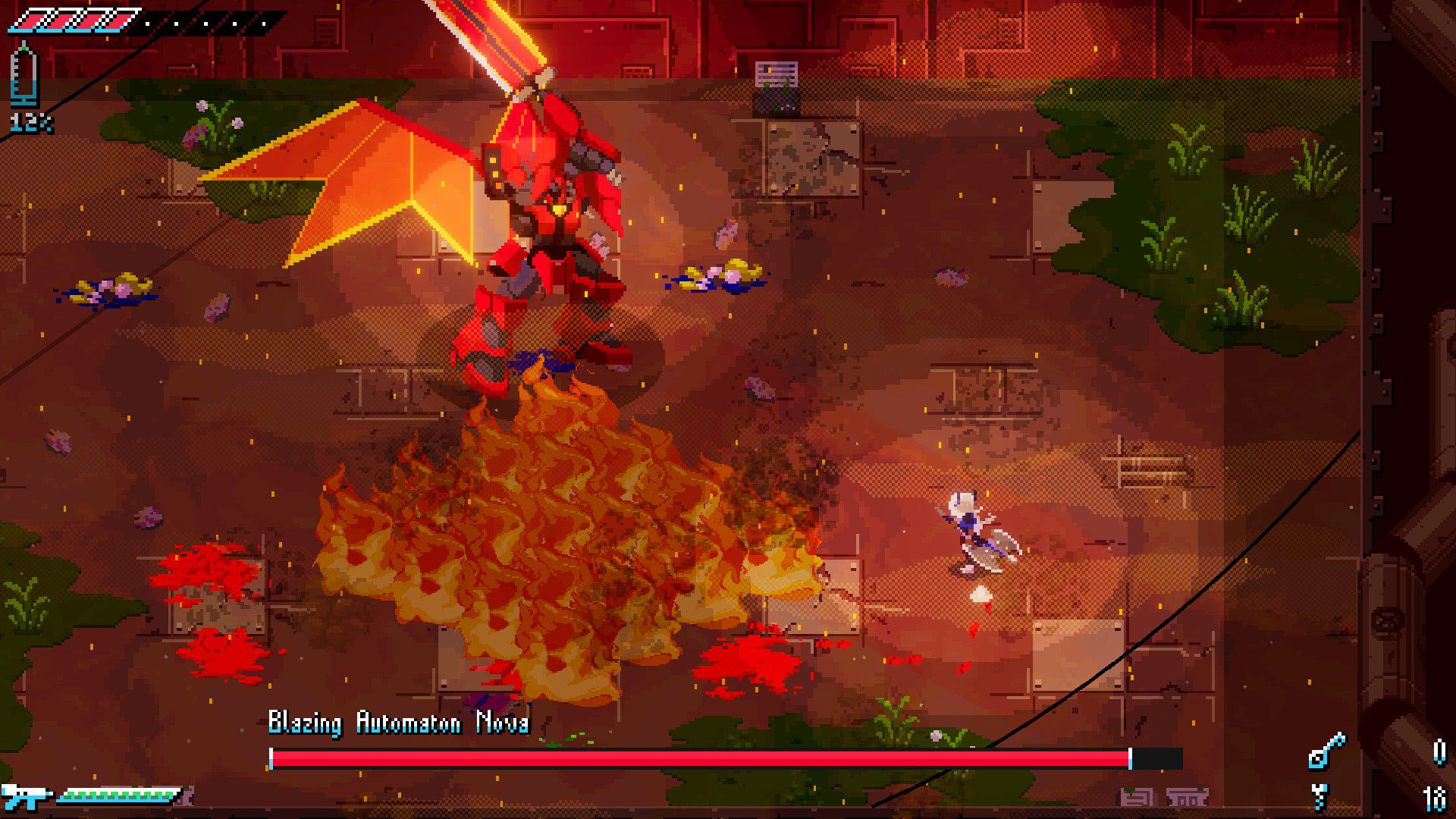 Another nice touch: the demo ends with a note that “there are many ways to get to the end.” It closes out with a neat completion screen that shows your playtime, death count, and how many Meteor Shards you collected. Nothing felt like an afterthought.

If any of this game seems like it’d be up your alley, it probably is. At a glance, it would be dangerously easy to overlook Unsighted as “just another pixel-art ARPG,” so I’m super thankful for the Steam Next Fest demo. It has single-handedly sold me. It’s my favorite demo from Steam’s play-at-home showcase, and I’ve played some fantastic stuff.

If the rest of the game can maintain this consistency, Studio Pixel Punk has a winner on its hands. Unsighted is scheduled for a 2021 release on Steam, Switch, and Xbox One.