Okay, so it’s got a bit too much in common with House of the Dead and not enough with Resident Evil 4 than many gamers would have perhaps liked, but it can’t be denied that Resident Evil: Umbrella Chronicles for the Nintendo Wii is set to be quite a ride.

Capcom certainly think so, since they appear to be planning a special Limited Edition version of the title in a themed box. A box that worryingly has “potentially infectious waste” written on the side. Surely not Capcom’s opinion of the game?

Released on May 31st in Japan, Capcom are offering a nifty, if silly, package with their first person zombie shooter. Lurch hungrily toward the jump to learn more…

[Update: Bah. Seems like our sources were wrong on this one. Translation error. The bad news is that this isn’t a special edition of Umbrella Chronicles. The good news is that you can get the box, and the box is all you cared about anyway.

Seems this is a DVD carry case that still comes with the extras pictured past the jump, but no game. You can buy it from Play Asia  for $34.90 at the end of the month.]

The special edition looks set to include: 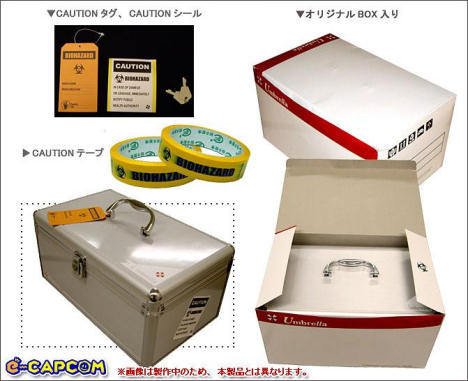 Certainly we will all have fun with the yellow “Biohazard” tape. Trick Mom and Uncle Jasper into thinking the kitchen’s been taken over by zombies! Oh, we’ll all laugh. Laugh until we’re throwing up.
Ludicrous? Yes. Impractical? For sure. But it does look pretty swanky.