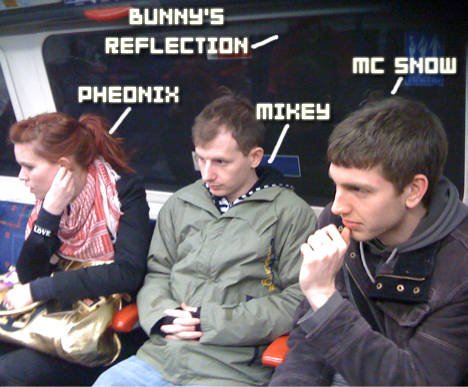 [Editor’s note: Justice and a few other Dtoiders were invited up to Capcom’s London offices to play Resident Evil 5. Read on for Justice’s impressions on the game and to find out if there will actually be a Merchant in the game or not. — CTZ]

Last week BunnyRabbit2, McSnow, Pheonix Blood, Mikey and I went to Capcom Europe in Hammersmith to play the review copy of Resident Evil 5 for a few hours (two to be precise!). Both Pheonix and Atheistium gave you an in-depth look at the game so I won’t go over that too much, instead I’ll talk about the day.

I met up with the rest of the gang in central and proceeded to Capcom Europe. Once in the building, we took the lift to the seventh floor and I instantly noticed the large poster of El Fuerte from Street Fighter IV. By the office there were magazines for reading, including GamesTM and Edge. Before that day, I had only imagined walking into a workplace and finding gaming magazines for reading. We were then led to another floor, and to a room with ten TV screens, each with a 360 hooked up to it. We were introduced to Ben Le Rougetel, the Director of European PR and Community and to Chiara, the Senior Online Marketing & Community Manager.

I’m pretty new to the Resident Evil series, (meaning that I’ve read the story of each game but the first one that I played was Resident Evil 4 and I only started playing that a few weeks ago). When I played the demo, I enjoyed looking at it (the game is pretty damn sexy), but I didn’t enjoy the game that much. I wasn’t sure why, but it was only until I played the game at Capcom that the reason became apparent.

When playing the demo (using the RE4 style controls), I felt thrown in. Having only played Resident Evil 4 on the Wii, I didn’t feel a similarity between the two games and their controls. However, when playing the game from the start (using the default RE5 controls), I felt like it was gradually introducing me to them. My shots were definitely more accurate, and when facing pressure from oncoming enemies, I definitely reacted better and was more able to use my surroundings to provide help for me and my teammate, as well as defense.

Another reason I didn’t enjoy the demo that much, I believe, was due to Sheva’s AI. Although she was helpful in defeating enemies, tactically, she was not of much benefit. Being able to play the game last week with another human that I could communicate with changed the way I approached the game completely. 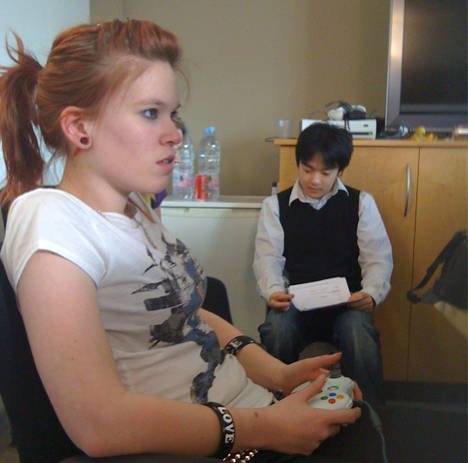 *Hollie deep in concentration while a midget looks down*

In the demo, I would often move on without Sheva since I felt she hindered me, playing the game “on my own” effectively, taking out what enemies I could, and not giving Sheva much of what I picked up on my journey in Kijuju. This time, when playing with a human partner, we were able to discuss tactics and inform each other of things we may have noticed such as green herbs lying around and also inform each other of when we were running out of ammo. We did a lot of trading between Chris and Sheva.

Ben: The Resident Evil series is about standing still and taking a shot, and conserving ammunition. If it turned into a run and gun, you lose that Resi feeling. So it’s sort of a half way house as why we didn’t go the full haul. It’s a tough one because me personally I don’t wanna see it, because then it’s not Resident Evil.”

Hollie: Do you feel it’s suffered from the FPS genre which was huge over Christmas, with title after title? RE5 is the first big game of Q1.

“Yeah I guess that’s probably a valid point. It’s the Resi on the next-gen, so people are going to have high expectations as well and they look at the competition and say, “Well they’ve got it, why haven’t you?” I mean, you know, time will tell. I know a lot of people have said “I played the demo, didn’t like the controls.” I can play with the old controls since I’m used to them. I think it’s really hard to please everybody, ya know? If at the end of the day we get lots of negative criticism for control mechanisms once the full game has been released and it’s been played through, then I guess we’ll have to look into it in the future. Even though the game has four different options of control, there is one for each person who plays the game.”

Me: Will the merchant from Resi 4 return at all?

“No he doesn’t return, the game has an “online” weapon shop now.”

So there we have it, no Merchant. 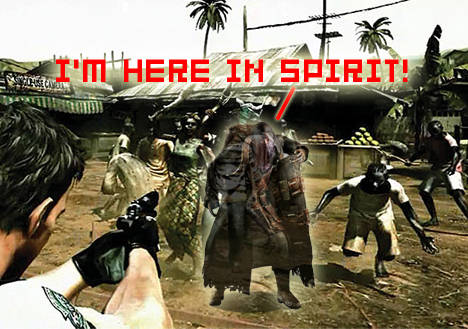 When I commented about the similarities between RE 5 and the current season of 24, he said that he also noticed them too! Jack Bauer + RE 5 would be gold!

Halfway through our playthrough, the “zombie” pizza arrived, with zombie meaning Pizza Hut. Three full pizza’s including margherita, pepperoni and meat feast and cans of coke. It was DELICIOUS! Capcom even covered our travel expenses up to £10, which took me by surprise. They were very welcoming and generous. At the end of the day, they gave us a bag each, which isn’t of the best quality, but hey, it’s free, so I’m not complaining! 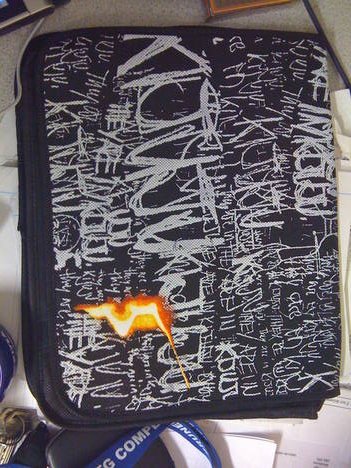 All in all, I thoroughly enjoyed the game, and will definitely be picking it up. It’s a shame the demo doesn’t really represent the game very well, which also happened with Burnout Paradise. The enemies were intresting, the graphics are beautiful, and playing with a partner made the game all that more exciting. Knowing that someone else is going through the same thing as you, at the same time adds more to the game for sure. When it was time to leave, I was left wanting more and more. 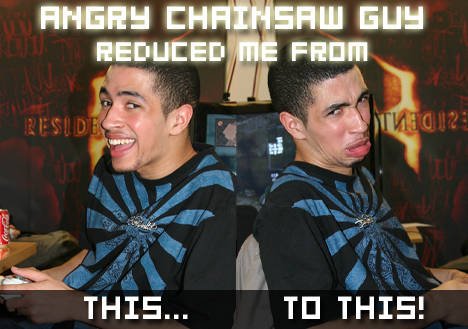 If the demo didn’t interest you, or left you disappointed, I advise you to rent the game when it comes out and try it with a friend.

After leaving, we went to a local pub and then went to Chinatown where we had dinner and said our goodbyes pretty much. As always it was awesome meeting other Dtoiders, some I had met before and some I had met for the first time.

Highlights of the day include:

• Playing the game and getting to enjoy the experience with Dtoiders (duh!)
• Hollie shouting out ”WHITE WOMAN!” at the first sight of a white woman in the cutscenes, she then looked over nervously at me, since I was the only semi-black person there haha!
• Talking on the tube [Editor’s note: Tube is English for trains … I think!] with the other Dtoiders about Bond films really loudly and watching other people eyeball us.
• Trading race jokes with the other Dtoiders (hey McSnow started it by saying I’d steal the camera when I was taking the picture!). Then I noticed Nigiri soup on the menu and brought up prawn “crackers”! All in good jest!

Thanks again Hamza & Destructoid for the opportunity!