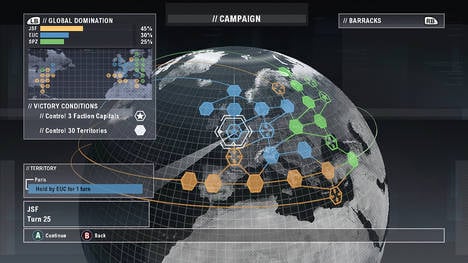 If you’re looking to scratch that “yell orders at a bunch of troops” itch, Ubisosft has just the thing for you. The publisher has announced that a demo for their upcoming voice-controlled EndWar will be made available this October for the Xbox 360. The catch? VIPs only, baby!

The demo will be available in limited numbers to fans who pre-order the game at participating retailers. The demo can only be downloaded by redeeming your super secret, ultra VIP code you receive upon pre-ordering. You’re very important; don’t let anyone tell you otherwise.

It doesn’t look like there will be a PlayStation 3 version of the demo, but EndWar will be coming to Sony’s console and the PC this October, so the wait to order troops around shouldn’t be too long. PS3 and PC owners just aren’t “very important.” Hey, Ubisoft said it, not me.

San Francisco – August 26, 2008 – Kicking off the countdown to the game’s release this fall, Ubisoft announced today that a pre-launch VIP demo of Tom Clancy’s EndWar(TM) for the Xbox 360® video game and entertainment system from Microsoft will be made available to consumers prior to the game’s release.  Tom Clancy’s EndWar was recently named the Best Strategy Game of E3 2008 by Game Critics Awards, the first time ever a console game has received this award.

“We believe EndWar will revolutionize the strategy genre on consoles and are thrilled gamers will be able to get a little taste of why we are so excited about EndWar’s release this holiday season,” said Tony Key, senior vice president of sales and marketing at Ubisoft.  “With its innovative voice command and intuitive game design, fans will be able to learn first hand how a console game was able to win the judges over and win Best Strategy Game of E3 for the first time in a category previously dominated by PC titles.”

The pre-launch VIP demo will feature multiplayer functionality and serve as a final stress test for the online systems of the massive war game, allowing fans to try EndWar’s voice command¬ enabled strategy prior to its release.  With only a limited number of slots available for access to the VIP demo, fans that pre-order the game at participating retailers will be given access to a unique token on a first-come first-served basis that will allow them to download the VIP demo from Xbox LIVE® Marketplace for Xbox 360.

The Xbox 360 VIP demo of Tom Clancy’s EndWar will begin in early October.