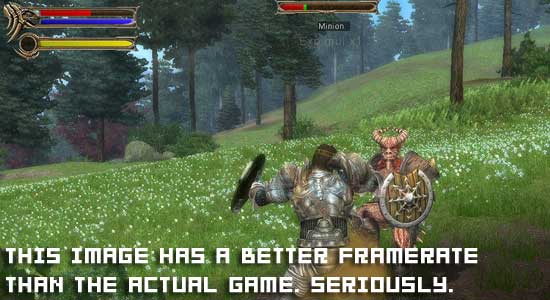 I’m not going to spoil the surprise or anything by saying this but, it’s certainly not BioShock. Or anything other good game, for that matter. Xbox 360 owners can find out tomorrow when a demo for the game will be available on Xbox Live. The demo will apparently offer a large portion of the game’s single-player experience, which is one of those free-roaming massive RPG-type games. Think Oblivion, just not as a good.

Additionally, both the PC and Xbox 360 versions of the game will be getting massive updates, some of which will be addressing some of the “issues” players have experienced. You know, like a horrible framerate and a terrifyingly poor user interface.

The full list of updates can be found after the jump. Thank God for patches.

– Horse steering has been improved

– Character development curve not as steep over level 25

– Necromancer spells have been balanced

– Bomb traps attached to some chests and wardrobes

– Balanced number of lock picks in chests and wardrobes

– Walking under water and not dying has been fixed

– Inaccessible Cave north of Ashos has been fixed

– Multiplayer Lag issues have been improved

– Resurrect spell on players has been disabled

– Experience points for killing players has been removed

– Disarming skill disabled against other players

– Freezing/stopping spells disabled against other players

– Multiplayer RPG quests given to all, reward splitter between players

– Issue of moving money between servers has been fixed

– Cloning character when logging on new WarNet server is fixed

– All PVP arenas unlocked from beginning

– Achievements for 5 elements is fixed

– Interface – no controls after “server refused connection” is fixed

– Doubling gold in multiplayer is fixed

– Doubling objects in multiplayer is fixed