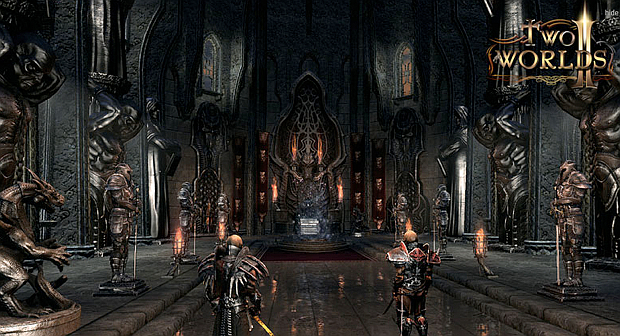 Earlier this morning TopWare Interactive announced the sequel to the best RPG of this generation, noting in the press release that it would again push the technical bar and launch players into a world of breathless wonder and exciting adventure.

The press release also mentioned improvements have been made: apparently the sequel to Two Worlds will be playable. The AI and combat system have been tweaked and a new engine has been created. So, expect to river-dance swordfight smarter and prettier bears in the game’s colorful world, Antaloor.

If you’re itching for some more Two Worlds information, feel free to check below the fold for the press release and take a gander at the game’s official Web site. It has tons of information certain to make even the most jaded RPG excited.

+++ The big box office hit once again issues your personal invitation to Antaloor – and a radical new player experience awaits you! +++

Karlsruhe, 3rd July 2009 – in the coming winter, the role-playing world of Antaloor will once again open its portals to PC, Mac and Next-Gen consoles. Following the fantastic worldwide sales success of the game’s famous predecessor, TopWare Interactive will once again open a radically new chapter in the fantasy world of Reality Pump.

The story of “Two Worlds II” is staged a couple of years after Part 1 – and it will lead you into hitherto unexplored parts of Eastern Antaloor where you’ll find many brand-new locations packed full of atmosphere – from dusty deserts to awe-inspiring temples.

Alexandra Constandache, the Executive Producer of TWII commented, “We intentionally opted for a completely independent game with radical new technology. This was the only way to ensure that we harness the enormous potential and experience gained from the making of the first “Two Worlds” project – and make full use of the further technical development of internal Reality Pump tools that has been on-going since the first “Two Worlds” was developed. This new release window gives us enough time to systematically implement both our own requirements and the feedback of the “Two World” fans, enabling us to create a breathtaking RPG experience.”

AND – we’ll shortly be bringing out the next version of your hotly-awaited ““Two Worlds” magazine, the “Antaloor Post” – and in it we’ll tell you all about the latest developments direct from the developers at Reality Pump! If you want to be on the inside track when it comes to having inside info about Antaloor, go to www.twoworlds2.com and register for the newsletter – you won’t regret it!